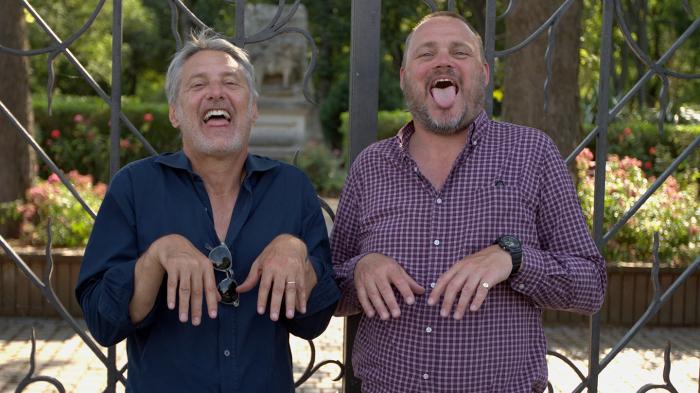 As part of Blaze on Tour, Al Murray is on a mission to find out what lies behind England's greatest feuds with its closest neighbours: Wales, Scotland, Ireland, Germany and France in Al Murray: Why Does Everybody Hate the English.

Each episode sees Al partner with a local comedian and proud patriot (Antoine de Caunes in France, Henning Wehn in Germany, Fred MacAulay in Scotland, Elis James in Wales and Andrew Maxwell in Ireland) to explore stories of historic battles, massacres, riots and revolutions that have set the tone for our modern relationships with our closest neighbours. It’s the perfect opportunity to shake hands and make friends…right?

BLAZE caught up with Al who has kept himself busy in lockdown and beyond making model tanks for regular listeners to his history podcast, We Have Ways of Making You Talk and reading loads of history books.

How do you describe the premise of the show to our viewers?

Why Does Everybody Hate the English asks the question, that if you don’t know the answer to, you really ought to. I go to five of England’s nearest neighbours with a comedian from each of those countries from Germany, France, Wales, Scotland and Ireland to find out what the contentions are, and we do what we can to bury them.

Since the show was first aired on Sky HISTORY two years ago, do you think everyone hates the English more or less?

I think the hate level is about the same. I think if anyone watches the show, they’ll realise the entire business of people hating each other is pretty daft. I may sound like a hippie when I say a thing like that but that is what I sort of took away from it.

How would the pub landlord answer that?

He wouldn’t understand. ‘Everyone loves us, don’t they?’

There’s a lot of myth-busting in this show, what’s one thing you learned that really stood out for you?

Two things really struck me. The first was while the Germans are never far from people's thoughts in this country they're not thinking about us for a minute. They’ve got bigger fish to fry is the simple truth.

Then the other thing was about how the Welsh language has been suppressed and oppressed over the years. The protests about it were only in the 60s which was within my lifetime. I got quite fired up on behalf of Welsh people. It's an outrage if the language you use with your kids isn't good enough for your government. What was going on?

So, if the Germans don’t care about the English what is the biggest rivalry between the nations?

The one with the biggest grind was in Scotland. This is tangled up with independence to a certain extent. That was the one with the most friction. With France, any rivalry between the English has been long forgotten, not a dormant volcano but a dead one. We made it a couple of years ago and Brexit had just happened and a lot of the French people we met were saying. ‘We know you don’t like us but because this Brexit thing costs so much money you’re making us pay for the privilege of not liking us.’

Did the show make you question your own nationality and identity?

I don't think of myself as English particularly. I have Scottish and Irish family. My grandmother was Austrian. I feel British if I feel anything which is a vaguer thing. So, I got to investigate the idea of being English rather than knowing necessarily what it meant through doing the programme.

You must have had a lot of fun with the other comedians in the show.

I know all the other guys, but I’ve not worked with Antoine before. He’s a mischief-maker and he’s world-famous in France. Everywhere he went, he was recognised. It's just kind of amazing.

Do you have any funny anecdotes from filming?

Me and Andrew Maxwell drank an awful lot of Guinness and there’s a scene in the Leprechaun museum in Dublin where we are absolutely hanging. It’s a miracle we filmed anything.

Tell us about your new book?

It's called The Last 100 Years (give or take) and All That and it is a misremembered journey through the 20th century. One of the things I'm really interested in is the bits of history people think they know about: some of them are upside down and half of them remember the wrong end. Also, the importance of how some historical events have changed and have shifted. For instance, the Spanish Flu Pandemic, which if you did a roundup of the 20th century it would have been a footnote but now it looks like the thing we should be looking at, and thinking about and observing. But it's got jokes in it. That's the main thing. This is a gag-packed history of the 20th century.