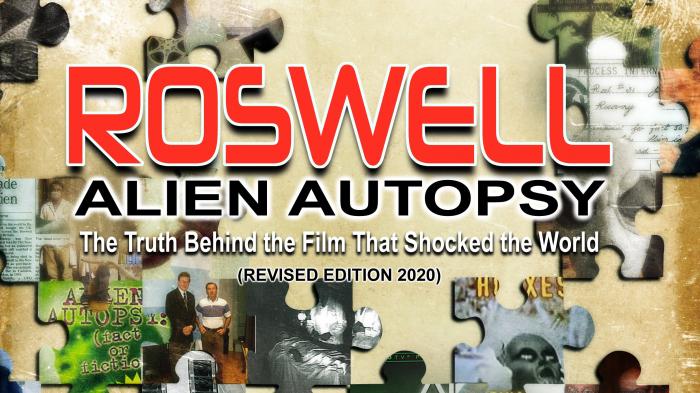 We're giving away 1 copy of Roswell Alien Autopsy by Phillip Mantle. To take part click on the competition link below:

Contains over 600 pages of information, newspaper cutting, original letters and fax plus interview transcripts, photographs and much, much more. Much of this original material has never been published before.

Roswell Alien Autopsy is the definitive book on the so-called ‘alien autopsy’ film, the most controversial piece of film in the entire history of UFO research. Released to the public in 1995 on TV video and via newspapers and magazines, this film has been debated quite literally around the world.

Roswell Alien Autopsy is the first and only book to deal with this film in its entirety. To begin with, it details who has seen what, and as is made clear, Ray Santilli, the owner of the film, has not released it all into the public domain. Several other researchers from the UK and Europe, including author Philip Mantle, have seen another autopsy film in the possession of Santilli that as yet has not been released. Their opening statements leave the reader in no doubt that there is more film available if only Santilli would release it.

For the first time the complete story of the film’s release is detailed along with selected commentary from the national news media that covered it during its international release in 1995. Interviews with Ray Santilli and other major players are included. Details of where it was screened and how it was released provide some idea of the conflict and controversy the film’s release caused. And last but not least we have all the details from behind the scenes.

We have commentary from Spyros Melaris, Ray Santilli, Keith Bateman, Reg Presley, Colin Andrews, Nick Redfern, Nick Pope and many more. This revised edition also looks into the highly controversial 2019 email release that featured US billionaire Robert Bigelow and Dr Christopher ‘Kit’ Green. If you have any interest in the alien autopsy film then this is the book for you.

Philip Mantle is a long standing UFO researcher and author from the UK. He was formerly the Director of Investigations for the British UFO Research Association and the MUFON Representative for England. He is the founder of FLYING DISK PRESS and can be contacted at: http://flyingdiskpress.blogspot.co.uk/