Alien abductions that happened in the UK 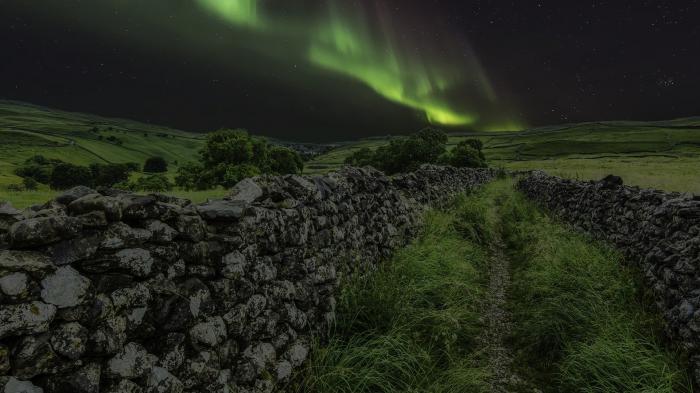 Drag someone in off the street and ask them to explain a typical alien abduction and they’ll probably act frightened and scream, ‘PLEASE! LET ME GO!’

Aliens abduct working class types from rural America. They beam them up, paralyse them and probe them with unspeakable metallic objects, before chucking them back on their farm. Without so much as a thank you card or a box of chocolates.

What are we to make of the fact that most alien abductions seem to take place in towns you’ve never heard of in states you’ve barely heard of? Are little green men just big fans of westerns? Is the sky above the average trailer park just that bit clearer in which to navigate a spaceship? Who knows.

But wait. There are stories of intergalactic kidnappings from other countries, they’re just little told. These are four of the more interesting British alien abduction stories…

On a dark and chilly November morning in the West Yorkshire market town of Todmorden, a police officer by the name of Alan Godfrey spotted a strange fluorescent thing in the sky. PC Godfrey was investigating a call about some escaped cows when he saw the ‘rotating diamond-shaped’ UFO. Other officers also went on record with having seen the thing.

He tried to call his sighting in but his radio was temporarily unable to work. He felt a strange sensation and soon realised that he was a further 30 or so metres down the street. Not only that but he had lost half an hour and had somehow split his work boot and hurt his foot.

He later underwent hypnosis on the advice of a solicitor and recalled how ‘a beam of light blinded him and made him pass out, before waking up inside a room being medically examined by small beings.’

In the mid-1970’s, the glamorously named Gabriella Versacci claims to have been taken aboard a spacecraft without her consent above the skies of the Somerset village of Langford Budville.

Versacci says that she stopped her car when a bright light obscured her vision. The vehicle then lost power. She then found herself aboard the half moon-shaped UFO, which she estimates was 20ft high and 40ft across.

Inside she says she was strapped to a table, had various bodily samples taken, was probed and even sexually assaulted by ‘slim, mask-wearing robot-like beings’.

Aldershot, August 1983. 77 year-old Albert Burtoo is out by himself, quietly fishing on the Basingstoke Canal. His concentration was broken when a terrifically bright light came into view and slowly lowered until it was clear that it was a craft of some kind and had landed on the ground near the man. Burtoo assumed it was a plane from the nearby Ministry of Defence base. It was not.

According to him, the elderly fisherman’s age saved him from too much hassle. Two ‘strange-looking beings’ escorted him to their now-grounded spaceship.

"They were about four foot high, dressed in pale green coveralls from head to foot," Burtoo told the media afterwards. "And they had helmets of the same color with a visor that was blacked out.

"What is your age?" one of the beings apparently asked him, in English, in an accent which sounded ‘like a mixture of Chinese and Russian’. When he told them, they informed him that he was too old for their tests and they let him go.

Aliens are ageist. Who’d have thought it?

It seems as if aliens like Yorkshire coppers. In 1987, another policeman from God’s own county claimed to have been taken aboard a craft and medically examined. One day, retired officer ‘Philip Spencer’ (an alias) spotted a large, bizarre-looking ‘dome-topped’ white object appear in the sky and land nearby.

Spencer claims that a humanoid creature then emerged and took him onto the craft. Unlike most other abductees, Philip managed to take a picture of the alien. The image was soon scrutinised by Kodak who confirmed that the picture of the alien was not superimposed, as some had claimed. This doesn’t exactly prove anything, but it’s an interesting footnote to the story.

What have we learned? Well, aliens are not quite as obsessed with Americans as you might imagine. Old folk are safe from them... The old bill, though? Slightly less so.