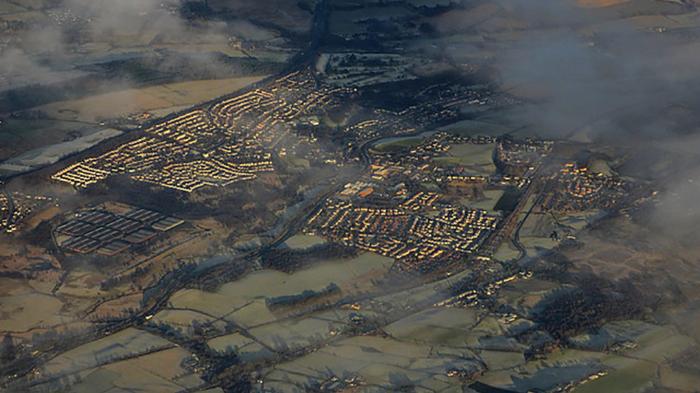 Bonnybridge is a large village of around 7,000 folk found just four miles west of the city of Falkirk, in the Central Lowlands of Scotland. North of the Forth and Clyde Canal, it's a centuries-old settlement that is close to one of the country's most complete surviving Roman forts along the Antonine Wall. But that’s not why the place is semi-famous.

Bonnybridge is a UFO hotspot, a veritable homing beacon for flying saucers. Each and every year, the area in and around the place has hundreds of sightings of unidentified flying objects. It’s been the case for some three decades now, giving cause for Bonnybridge to be referred to by some as ‘The Scottish Roswell’.

Of course, most of us are more than familiar with the goings-on in Roswell, New Mexico, back in 1947. When an apparent alien craft crash-landed in the desert. But while Bonnybridge can’t claim to be the home of a crash site or any shady Area 51-style research facilities, it still boasts a bizarrely high rate of UFO reports.

Shining star and cigar-shaped aerial craft are often cited, with frequent mentions of howling or buzzing noises accompanying them. The things are generally said to remain stationary in the sky until they fly away at a terrific speed. Crafts have even been spotted landing on local golf courses. Abductions and procedures onboard the ships have even been spoken of, albeit in slightly more hushed terms.

It’s not a lighthearted joke of an issue, either. The local townsfolk don’t write the sightings off as daft and cash in on them with alien-themed coffee shops and a few tacky postcards on sale in the Post Office. They take Bonnybridge’s abnormally high UFO sighting rate very seriously indeed.

Councillors and senior academic types within the community have written to British Prime Ministers on several occasions, demanding that an investigation of some description be launched. Their letters effectively went unanswered. Writer and UFO investigator Malcolm Robinson was involved in many of the attempts. He takes up the story:

'We went down to 10 Downing Street with our petition from the people of Bonnybridge and it all fell on deaf ears. All they said was "as these objects did not constitute a threat to the defence of the United Kingdom" and that they would not open any inquiry. We were really annoyed and we hope to do something similar in modern times with Nicola Sturgeon and other ministers.'

'Bonnybridge is a hot spot or window area that seems to attract a higher concentration of UFO reports than anywhere else,' Robinson goes on. 'The mmillion-dollarquestion is "why?" There is nothing significant in the land of Bonnybridge, there are no military airbases or anything. We simply don't know. All we can say is the people of Stirlingshire are seeing things in the sky that do no conform to conventional aircraft or helicopters.'

'There are certain things that just defy explanation and it's to those sightings that we are very keen to find out for sure. I would put a figure of about 95% of reports being explainable sightings, however.'

'The 5% that remains... of that 3% could be our own "black budget" technology - something akin to stealth aircraft that was flying in the skies for many years and leading to false UFO reports. That leaves 1% - 2% of that could be new rare atmospheric phenomena something akin to ball lighting. The 1% that's left, the fly in the ointment if you will, are these classic UFO sightings that have not just been seen here in Scotland but the world over..."

Now, of course, Robinson is a ufologist. A believer. But his comments don’t seem overly sensationalist. Especially given he’s so willing to dispel the majority of sightings as ‘explainable’. And what skin in the game do the rest of the good people of ‘The Falkirk Triangle’ have? Given they don’t make any money out of their claims? It seems unlikely that a whole area would collectively lie. Especially with it being motiveless.

What are we left to think? That aliens plove Scotland? Or perhaps as ever, it’s not easy to come up with any hard and fast conclusions. All we know for certain is that something’s definitely afoot in the skies above Stirlingshire.