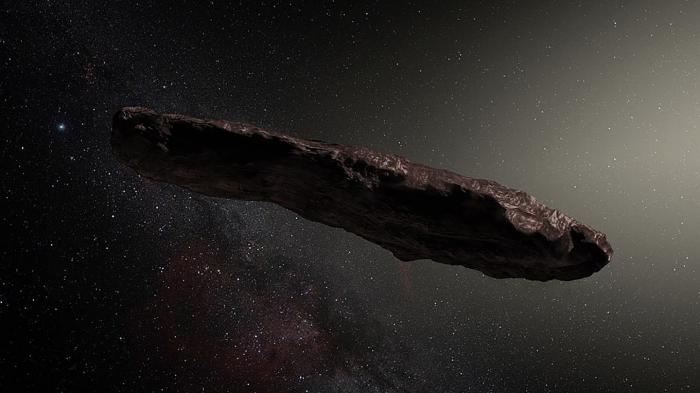 Oumuamua. It may sound like the noise made when two people air kiss at a fancy cocktail party, but - trust us - it’s infinitely more interesting than that.

The word is Hawaiian in origin. It means ‘messenger’. It was given to a rather puzzling interstellar object that was detected passing through our solar system back in October of 2017...

Oumuamua was discovered by the Canadian astronomer Robert Weryk using the Pan-STARRS telescope at the Haleakalā Observatory in Maui, Hawaii. Red in colour, the thing is estimated to be anywhere between 100m and 1,000m long, with a width thought to be in the range of anywhere between 35m and 160m. At around 20 million miles away, understandably it's difficult to be too specific with numbers.

The official word from the astronomy community is that Oumuamua - the first interstellar object ever recorded in our solar system - is likely to be 'a natural object'. The theory most put forward by scientists is that it's probably matter from a disintegrated comet. There is, however, dissenting hypotheses from others in the field that are brave enough to speculate that it could well be some form of alien technology. Imagine that.

In 2018, the head honcho of Harvard’s astronomy department, one Avi Loeb, co-authored a paper with fellow Harvard type Shmuel Bialy which discussed Oumuamua’s 'peculiar acceleration' and suggested that 'the object may be a fully operational probe sent intentionally to Earth’s vicinity by an alien civilization.'

This is no crank shouting 'ALIENS!' on an online forum, though. This is one of the world's most eminent experts on space theorising that the thing previously assumed to be a piece of comet or asteroid could, in fact, be proof of extraterrestrial life. Professor Loeb at least wants us to consider the possibility that Oumuamua was sent our way by aliens from another solar system or galaxy. And we’re all for that.

This isn’t just guesswork or the aching desires of some stargazer who watched too many episodes of Star Trek as a kid. Loeb points to six ways in which Oumuamua behaves differently to other less interesting rocks. Each interesting - though complicated - point adds credence to his exciting idea.

Prof. Loeb gave an interview with the esteemed New Yorker magazine where he reaffirmed his belief that life exists on other planets. 'There are tens of billions of stars in the Milky Way, it is quite likely we are not alone,' he said.

Let’s imagine that The Professor is right for a moment. That Oumuamua was some sort of probe or craft sent out to monitor or communicate with us. Does that mean we might make interstellar pals…? Well, no. Not according to Loeb.

'It’s very similar to when I walk on the beach with my daughter and look at the seashells that are swept ashore,' he says. 'Every now and then we find an object of artificial origin. And this could be a message in a bottle and we should be open-minded. It’s possible that the civilization is not alive anymore, but it did send out a spacecraft. It may be dead by now.'

So, then. Was Oumuamua an alien probe sent to our galaxy to make contact with us or was it just a rock? The science, ironically, isn’t rock solid. Professor Loeb’s theory is tantalising, but his theories are - admittedly - rejected by most other astronomers.

Did aliens visit us in 2017? Well, it’s possible. We can’t say for certain, though. As the world-famous US space expert Carl Sagan was so fond of saying, 'extraordinary claims require extraordinary evidence.'