The history of foo fighters (no, not those ones) 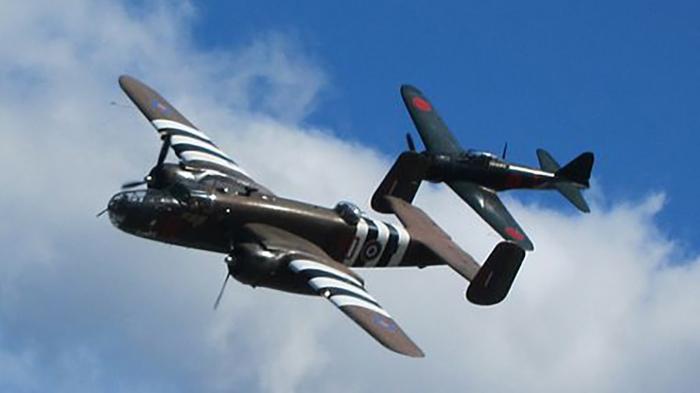 Right off the bat, let’s clear something up. If you’re here to read about how Dave Grohl’s famous band came about, you’re in the wrong place. You might want to try Kerrang or somewhere. If you’re reading this to find out all about the unidentified flying objects that have dogged the world’s armed forces for decades, well… this is entirely the right place.

It’s a big question to start with. Foo fighters are basically UFOs. So, by their very definition, no one truly knows exactly what they are. Or, if they do, they’re not telling the rest of us. Are they alien crafts? Perhaps. We’ll come onto the explanations and theories later.

‘Foo fighters’ are inexplicable aerial phenomena, generally reported by pilots in air forces. Most famous examples come from the United States Air Force, who began reporting mysterious craft in the skies over Europe and the Asiatic-Pacific Theatre during the Second World War.

Similar sightings have been made by pilots in the years since the end of World War Two, across many countries. So the term has come to be synonymous with fighter pilots’ UFOs sightings. The original term, however, was only meant to refer to a certain type of unknown craft as seen by American pilots.

Where does the name come from?

The term ‘foo fighter’ was coined by a radar operator in the 415th Night Fighter Squadron, called Donald J. Meiers, back in 1944. He took inspiration from his favourite comic, the popular Smokey Stover strips by Bill Holman that appeared in the Chicago Tribune between the 30s and 70s. Stover's catchphrase was ‘where there's foo, there's fire!’

The term caught up with the men in the force because ‘foo’ was also shorthand for ‘FUBAR’, a polite way of saying ‘effed up beyond all recognition’. So ‘foo’ or ‘FU’ made sense as something that was crazy (or ‘effed up’).

Internally, for the first few years, these head-scratching flying objects were called ‘f***in’ foo fighters’, which is actually how Meiers used to describe them. In time, their cussy nickname was cleaned up a little and the first eff was dropped.

Of course, UFO sightings are as old as time. But pilot sightings that fall under the foo fighter banner date back to the early 1940s. Seen and reported by Allies forces, they were known colloquially as ‘Kraut fireballs’ before they were given their slightly less offensive ‘foo fighter’ tag.

In 1941, a Polish merchant vessel (the SS Pułaski) was transporting British troops across the Indian Ocean when two of its sailors reported seeing ‘a strange globe glowing with greenish light, about half the size of the full moon’.

Allied pilots flying over Europe at night witness glowing spherical objects following them in November ‘44. They were bright red, white and orange Christmas tree-style lights that disappeared after complex fighting patterns were reported. While never described as hostile, they appeared to be able to outmanoeuvre the pilots’ planes and could not be shot down.

There are multiple other reports of foo fighters throughout WWII. Charles R. Bastien of the US Air Force saw them over the skies of Belgium and Netherlands towards the end of the war, referring to them as 'two fog lights flying at high rates of speed that could change direction rapidly'.

US pilot Duane Adams and multiple men in his crew reported seeing foos above him over the Pacific Ocean shortly after the war too. The sightings have never really stopped. The most notable recent example dates back only to 2021, with Pakistan International Airlines pilots reporting having witnessed 'a large round object had a metal ring around it and was emitting white light from the centre'.

There are multiple explanations for these so-called foo fighters. Each has weight, but we don’t know for certain which - if indeed any - is correct.

Here are just some of the more prominent theories behind foo fighters:

● Nice and simple this first one - they’re extraterrestrial spacecraft

● They could be unusual weather phenomena, eg ball lightning

● Might they be sunlight that’s reflecting off ice crystals?

● Could their prevalence during WWII be proof that they were experimental Nazi tech?

● Pilots have been known to suffer visual hallucinations during night flights

So, then. Foo fighters. Not just a dad rock stadium band fronted by the drummer fella from Nirvana.