The weirdest conspiracy theories about the Roswell incident 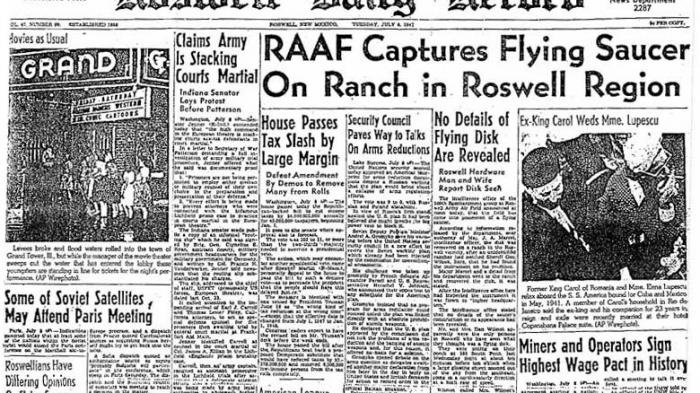 The grainy images of two men in hazmat suits examining the lifeless, pot bellied body of a large-headed extra terrestrial are famous. Or, at least, infamous. Synonymous with an apparent UFO crash landing, the 17 minute ‘alien autopsy’ footage turned out - unfortunately - to be a hoax.

Yet while the video that excited so many when it surfaced back in 1995 proved to be fake, the incident the clip claimed to come from is very real indeed. What exactly happened in ‘The Roswell UFO Incident’, however, remains to be known. At least to us normal folk, anyway.

What might’ve happened in the small New Mexico city of Roswell back in July 1947…?

Let’s look at some of the theories, shall we?

An alien pilot took their eye off the sky

We’ll begin with the main theory that’s pervaded the incident for decades - that an alien spacecraft crash-landed in the New Mexico desert.

It didn’t take long for the stories of a downed flying disc to start circulating when unusual debris was found on a ranch some 30 miles north of Roswell in early July 1947. By July 8th, local newspaper the Roswell Daily Record led with the headline, ‘RAAF Captures Flying Saucer on Ranch in Roswell Region’.

As the years passed, the story was built upon by locals, ufologists and conspiracy theorists. The ‘discovery’ of the since-debunked 1995 autopsy filmed really brought the story to the world’s attention.

The UFO was of Nazi origin

Post-war America had a fascination with the Nazis. Understandably, given Adolf Hitler had recently very nearly taken over the world. But whereas Europe, having faced the evils of the Third Reich first hand, was quick to dismantle Nazism and consign it to history, the USA was focused on pilfering its biggest talents and most useful technology.

While Operation Paperclip secretly shipped Nazi scientists and doctors across the Pacific to do their bidding for a new employer, other secret operations connected to the work of Nazi Germany quietly went about their business.

Basically, what we’re saying here is this: NAZI UFOs.

Yup, that’s right, some people have claimed that the object that crashed in the New Mexico desert was part of a project to test Nazi flying machine tech. It was, apparently, a craft called ‘The Bell’, a machine which was propelled with electric particles.

According to this theory, the technology was unstable and simply dropped out of the sky during a test flight. The project was then scrapped.

Charles Berlitz and William Moore’s classic conspiracy book The Roswell Incident was first published back in 1980. In it, a new theory is put up for examination.

Berlitz and Moore suggest that it was, in fact, a spaceship which crashed on the ranch. But that it wasn't ‘driver’ error or shot down, the accident was caused simply by a strike of lightning.

Why were the aliens there? Well, according to the authors, they were looming in the skies keeping their oversized eyes on US nuclear weapons activity. Something they were concerned about. For some reason.

It was a US Air Force balloon

73 years of whispers, theories and tales of alien spacecraft and autopsied ETs have led to the incident being firmly mired in paranormal lore. So perhaps, rather ironically, the most controversial explanation as to what happened back in July of ‘47 is the US government’s ‘official’ version of events.

For years, the official story was this: it was a weather balloon that crashed. This rather simplistic explanation kept most Americans happy for a few decades until alternative ideas surfaced.

Eventually, the American Air Force expanded on their story and admitted a little more. The balloon was, they revealed in two reports in the late 1990s, a nuclear test surveillance balloon used in something called Project Mogul, a top secret and covert operation to detect sound waves coming from Soviet Russsian atomic bomb tests.

It’s doubtful we’ll ever really know the full story. The truth is out there. It’s just that none of us will ever find out what it is...