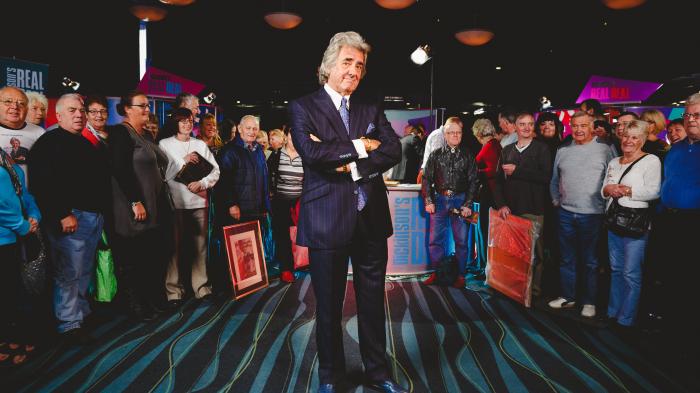 Dickinson’s Real Deal has come to Blaze, following members of the public as they try to flog their bobby dazzlers – aka, cherished antiques and heirlooms – for the highest price possible. Will they sell to the dealers, or chance it at auction? Fortunately, they don’t have to make the decision alone. On hand to give expert guidance is the iconic David Dickinson, he of the massive mane and mahogany hue.

But just how did David Dickinson, the man, become David Dickinson, TV legend? Well, first of all, Dickinson wasn’t actually his birth name. Rather, it was the surname of his adoptive parents. He was born in Cheadle Heath, Stockport to Eugenie Gulessarian, the daughter of an Armenian textile merchant who’d moved from Turkey to Manchester. Family issues meant that he couldn’t be raised by his biological mum, leading to his adoption by the Dickinsons. Though David would later get in touch with his mother, and exchange letters, they never met face to face.

By curious coincidence – or by some magical genetic imperative – the young David wound up working in the textile business, just like his biological grandfather had. But the big turning point came in the late 60s when he started seeing his future wife, Lorne Lesley. They met in a nightclub where she was belting out tunes as a cabaret singer, and David decided to give up the textile industry to become her manager. They criss-crossed the globe from gig to gig. And, as Lorne wouldn’t have to perform until the evening hours, they had time to browse local markets during the day.

This inspired David’s interest in antiques and collectibles, and in the 1970s he decided to make it his profession, setting up his first antiques shop with a childhood friend. Years went by, and David shifted his focus to selling at high-end antiques fairs, where he would set up his stand. Then, one fateful day in the late 90s, David went to a friend’s barbecue, and that decision would change his life.

As the meats sizzled and the drinks flowed, he got chatting to a TV producer who immediately pegged David as 'the real life Lovejoy' and recognised his showbiz appeal. Before he knew it, David Dickinson was the subject of a two-part BBC documentary following his preparations for a major antiques fair. His flamboyant look and cheeky charisma caught viewers’ imaginations, and the documentary led to David popping up on breakfast shows.

Of course, his truly big break was his starring role on Bargain Hunt, which promptly became a cult daytime sensation (kind of like Homes Under the Hammer is today). David Dickinson had truly arrived, his famously tanned skin, thick curls and carefully perched glasses becoming known all across the country and turning him into a bonafide superstar. You couldn’t move for people describing things as 'a real bobby dazzler' and 'cheap as chips'. Well, you could, but you get the idea.

Dickinson’s Real Deal sealed his star status, letting David do haggle-battle with dealers on behalf of the public, and empowering ordinary people to get one over on the savvy antiques experts. Not all heroes wear capes (though wouldn’t David look splendid in one?).