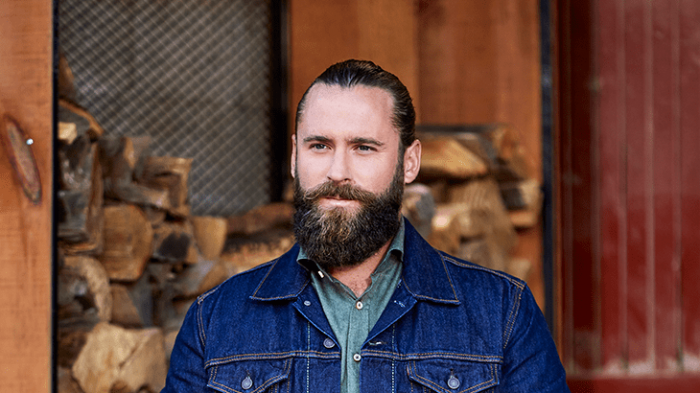 BLAZE’s latest and most appropriately named show is a cooking competition with a difference. In Fire Masters: BBQ Wars, three chefs push their grilling talents to the limit in three fiery culinary challenges. Each week two contestants are eliminated, and the last chef standing will go head to head against one of the Fire Masters judges for the chance to win $10,000.

BLAZE spoke to Dylan about Fire Masters where we atalked about the series and also discussed grilling guinea pig and the best marinade for a flank steak.

BLAZE: How would you describe the premise of the show?

Dylan Benoit: ‘It's a cooking competition format that most people will be familiar with. But what sets Fire Masters apart is that it’s all based around wildfire grilling and smoking. What's unique is that it’s filmed outdoors. Most other cooking shows are filmed in the studio with ovens and ranges. Cooking with live fire is a completely different environment.’

BLAZE: What do you think it takes to be a Fire Masters champion?

Dylan Benoit: ‘The dishes are judged on execution, presentation and taste, but above all, you need to be organized. Put some chefs in a new and unfamiliar environment, cooking with live-fire and it's almost like their common sense goes out the window. They start forgetting really basic things like seasoning and tasting their food. To succeed in Fire Masters, you have to have your wits about you, you have to be organized and on time, or it will get the better of you very very quickly.'

BLAZE: Did you learn anything from any of the contestants in the show, who are all professional chefs?

Dylan Benoit: ‘Absolutely, in my entire career I've always had the mindset that you can learn something from everybody that's around you, whether it's the Head Chef or a line cook or a dishwasher. Everybody's got different cooking experiences. They know about different ingredients better than you do. So, on the show, there's always chefs pulling out ingredients or techniques that I thought I was familiar with but using them differently. That's unique and interesting and you can always take a little something away from that.’

BLAZE: The final round of the show, is a head-to-head with one of the Fire Masters judges. Who would you least like to go up against yourself?

Dylan Benoit: ‘I would probably not want to go against Dale MacKay. Dale is a certified badass. Dale has worked with Gordon Ramsay and Daniel Boulud and he's got a very intense kind of demeanour. He's very knowledgeable and has a wide range of dishes and techniques in his arsenal. He's a force to be reckoned with.’

BLAZE: There are so many amazing dishes in the show but which dish stood out for you in the whole series?

Dylan Benoit: ‘There was one dish that was prepared by Tiffani Faison and it was a charred carrot salad with a fresh cranberry vinaigrette. It sounds crazy, as there's all this beautiful meat on that show but it was that dish of salad and also a truffle and mushroom polenta dish by Connie DeSousa. I think these were two of the top things that I remember from filming.’

BLAZE: Sounds like you should consider doing a vegan version of Fire Masters?

Dylan Benoit: ‘Vegetables lend themselves to fantastic grilling. It’s a great way to impart incredible flavour and texture with different marinades and different seasonings. I think a lot of people forget that vegetables work well on a grill. That's one of the big things about Fire Masters is that it expands people's horizons and makes them think “I didn't realize you cook that on a grill,"’.

BLAZE: If you had to take part in the signature dish challenge on the show, what would you prepare?

BLAZE: What's the weirdest meat you put on the barbecue?

Dylan Benoit: ‘I had the opportunity to prepare cuy in Ecuador several years ago which is guinea pig, the national dish of Ecuador. It kind of tasted like a chewy chicken. That was a very interesting experience, not something that I ever need to do again.’

BLAZE: Next week is the start of National BBQ week with lots of people raising money for charity with the BARBI FOR BRITAIN on Monday 25th May. What’s one rookie mistake people make when it comes to barbecue?

Dylan Benoit: ‘I always tell people that heat management is critical. If you just put your grill on full blast, any burger you place on there, is going to be burned on the outside and raw on the inside or, or just not cooked all the way through. You have to learn how to master the different temperature zones of the barbecue and have the confidence to keep it cooking at a lower temperature for a longer period to reach the desired result that you're looking for.’

Need tips on how to cook the ALMIGHTY steak this #NationalBBQWeek? @DJ_BBQ's got you covered pic.twitter.com/TPMvpxN7TF

BLAZE: In terms of barbecuing, is an open flame always best or is there a place for cooking with gas?

Dylan Benoit: ‘Absolutely, charcoal and live-fire impart of flavour that you can't imitate. That's one of the nice things about cooking on live-fire. It takes time to learn how to control it but the results you get with the flavour are unparalleled. Gas grills are incredibly convenient. But you don't get those nice grill marks and that charred flavour. It's give or take, if you want to go 100% for flavours, it has to be cooking on charcoal with live-fire. If you just want something a little bit more convenient and you don't want to cook in your apartment, then a gas grill is perfect.’

BLAZE: For everybody taking part in BARBI for Britain. What's your favourite thing to barbecue?

Dylan Benoit: ‘It’s kind of boringbut I love a thick double-cut ribeye with the bone in. It doesn't get any better than that on a grill. You've got various textures of marbles with the ribeye and the spinalis of the rib cap and the ribeye itself. And if you don't want it too tough, put a nice little oyster muscle on the grill. Cooking on the bone is always nice, as it adds a little bit of extra flavour and then as the fat in the ribeye renders out, especially over wood charcoal, you get this incredible smoky flavour. I say when it comes to cooking on the grill, a bone and rib eye is the gold standard.’

BLAZE: What’s the best side dish for barbecue?

Dylan Benoit: ‘Straight up Asparagus with a bit of salt. Carrots and mushrooms are fantastic on a grill.’

BLAZE: What’s the best drink to accompany a barbecue?

Dylan Benoit: ‘Beer and bourbon. You start with the beer and end with the bourbon, or sometimes both together.’

Dylan Benoit: ‘Chimichurri is one of my favourite marinades especially if you’re doing something on the tougher side like a flank or a skirt steak marinade. And then you know you'd like slice that up and put it in tacos or put on a sandwich, really, a knockout for me.’

BLAZE: Lockdown aside, if you could host a barbecue this weekend and could invite anybody in the world, who would you invite and why?

Dylan Benoit: ‘If I could have my dream barbecue this weekend this weekend I would invite my girlfriend over and I’d have my father, my brother come down from Canada. I’d get some of the old chefs I’ve worked with in restaurants together and we’d have a good old honest cookout with all the guys.’