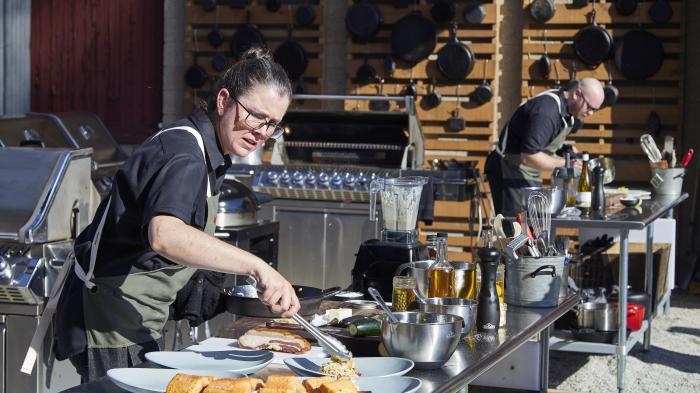 The world’s biggest BBQ competition format show comes to the UK for the first time ever and it’s only available on BLAZE.

To bring even more sizzle to the 24th National BBQ Week (25-31 May) and help the nation get fired up in lockdown, BLAZE is raising the steaks with the exclusive UK premiere of the hugely popular cooking competition series Fire Masters: BBQ Wars.

For the first time, British viewers will get the chance to see the show which has enthralled lovers of food and flame across the Atlantic. Premiering during the 24th National BBQ Week, the show provides the perfect prepapration for the summer, when the nation’s back gardens will be engulfed with the aroma of food charring on an open grill, come rain or shine.

Hosted by Canadian chef and culinary entrepreneur, Dylan Benoit, Fire Masters: BBQ Wars sees three professional chefs and resturanteurs from some of North America’s best restaurants, grills and BBQ joints pitted against each other to push their grilling talents to the limit as they do battle in fiery culinary challenges, cooking up creative, mouthwatering, flame-kissed dishes.

One chef is eliminated in each of the first two rounds, and the last chef standing then goes head-to-head with one of the Fire Masters: BBQ Wars judges in an epic final. Every contestant will have to use their decades of BBQ expertise to create beautiful dishes that give them a chance of winning $10,000 cash and the coveted title of “Fire Masters: BBQ Wars Champion”.

The ten-part series Fire Masters: BBQ Wars premieres on BLAZE® throughout the 24th National BBQ Week from Monday 25th May at 8pm.