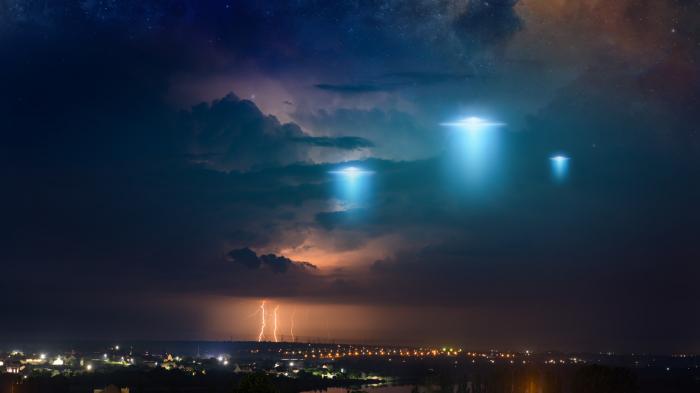 There is nowhere quite like the USA for a UFO sighting. Many of the most memorable and recognisable examples of potential alien activity come from across the pond. However, this isn’t always the case. Multiple witnesses always add value and believability to a UFO event, and here we’re looking at some notable examples of mass UFO sightings from the US and around the world.

The Lights above New Jersey Turnpike – 2001

Motorists are not known for their love for stopping once they’re speeding down the freeway. However, on 14th July 2001, things were a little different. Drivers coasting along the New Jersey Turnpike all stopped in their tracks. For around fifteen minutes several cars came to a standstill watching an unusual V formation of orange and yellow lights.

The lights sat between Staten Island, New York and Carteret, New Jersey over the Arthur Kill Waterway. Metro area residents and a local police officer all testified to seeing the lights. Air traffic controllers denied that any aeroplanes, military craft, or space flights could have caused the mysterious lights.

On 6th April 1966, the Westfall UFO sighting was recorded in Melbourne, Australia. At around 11am, students and a teacher from the local high school reported seeing a flying object. They described it as a grey or silver-green saucer-shaped aircraft with a pearlescent purple hue. It measured at least twice the size of a family car and the students asserted it was descending to earth, flying over the school, and disappearing behind trees. Eyewitnesses then say the craft reappeared, climbing into the sky at speed and heading off into the distance. Some even claimed it was chased by five further unidentified aircraft.

The Phoenix Lights, or Lights Over Phoenix, were a widely sighted UFO event seen in the skies over Arizona, Nevada and Sonora in Mexico. The event took place on 13th March 1997, and thousands of people reported varying degrees and descriptions of lights in the sky between 7:30pm and 10:30pm on the same day.

The lights fell into specific patterns according to many eyewitnesses and the governor of Arizona at the time described the sighting as “otherworldly”. A triangular formation of lights passed over while Phoenix area residents reported a static series of lights as well. Some eyewitnesses even claimed to see a large L-shaped vessel emitting spherical lights.

It takes a lot to stop a football match, but in 1954, flying objects in the sky did just that. On 27th October 1954, Fiorentina were playing against their local rivals, Pistoiese, in Italy. Ten thousand fans attended the match in the Stadio Artemi Franchi but just after half-time, silence descended across the ground. The crowd began roaring and pointing skywards, prompting the players to join in and see what was going on.

Eyewitness accounts of the event differed from person to person, but all believed they’d experienced something fantastical. One player, Ardico Magnini, known for his role in the 1954 World Cup, described the sighting as “like an egg moving slowly” and also noted seeing silver glitter. Another spectator described crafts that looked like cuban cigars. Whatever the crowd and players saw in Tuscany that day, they believed it was out of this world.

On 16th September 1994, 62 pupils at the Ariel School near Ruwa, Zimbabwe claimed they saw silver craft descending from the sky. The pupils, all aged between six and twelve, said at least one aircraft came down from the sky and landed in a nearby field. They also said they saw black-clothed creatures who approached them and used telepathic communication to share messages about environmentalism. Many of the children who were involved in the event maintain to this day that it happened.

When a UFO sighting attracts mass attention or multiple individuals who all share a similar view, people have got to stand up and pay attention. These are just some of the most compelling mass sightings of our time.