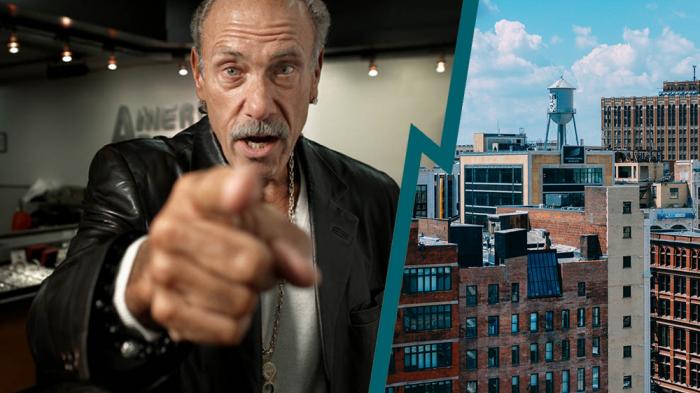 Hardcore Pawn, which BLAZE viewers can watch from the beginning weeknights at 10pm, is the reality series that takes viewers into Gold’s family-run pawn shop American Jewelry and Loan.

Sometimes it is hard to believe what you’re seeing – but this is the art of the deal.

“Well I’m an actor,” says Gold. “I’m a pawnbroker, and you know, to be a salesperson you need to be an actor.” Les has been selling since he was seven and he knows the game of sales better than most.

Les’ authenticity, like his leather jacket, never changes. He’s cut from Detroit, a city of hard-work, industry and flair.

Detroit is a city that has had its share of ups and downs, from booming in the mid-1900s as the fourth biggest city in the US, to bust in the early 2000s, eventually filing for bankruptcy in 2013.

And it’s here where Les formed his approach, one that is typical of Detroit, “My theory in business is you have to make mistakes,” he says. “If you don’t you’ll never learn… If you learn how to ride a mistake that you’ve made, well that’s where the real knowledge comes from.”

Just like Detroit, Les takes the ups with the downs arguing that our failures and successes are one and the same, or at the very least they are what we judge the other by.

With @TheRock appearing on BLAZE tonight in Doom, and #ForgedInFire enjoying two new episodes tomorrow night, it got us thinking. What are the best video game swords that would find success with @DougMarcaida? https://t.co/4DOr848gCj pic.twitter.com/SC4mPKXMXa

Les’ other motivation – and perhaps even more important than the city he’s from – is family. Les runs American Jewelry and Loan with his two kids Ashley and Seth, the other stars of the series. Together they have shined a light on what it takes to run a family business, trust.

“The areas that we’ve opened stores in are very happy to see that we’re a family-run business,” Les told Entrepeneur.com. And, while they don’t always get along – “leave me alone dad” – it’s a refreshing reminder to how frank, angry and caring we are amongst family, a relationship like no other.

We’re not advocating working with your parent’s, but the Gold’s prove it can work and work well. Today the shop employs over fifty people, serves around 1,000 customers-a-day, and Les’ autobiography, For What It's Worth: Business Wisdom from a Pawnbroker, has been a big hit.

If you’re ever in Detroit, do yourself a favour: head over to the Green Eight Shopping Center on 8 Mile Road. Once at American Jewelry and Loan, you can maybe meet the man himself, marvel at the endless inventory, or maybe just sit and watch as the incredible deals go on around you.