How Steve McQueen turned Hollywood into his own Personal Garage 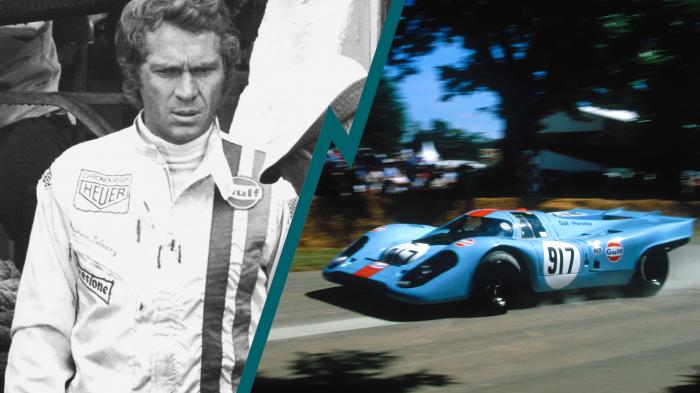 The Ice Road Truckers drive amidst danger not just because they get paid for it, but because they have a genuine passion for the open road. And they’re not the only ones.

Many of us share their love for getting behind the wheel, but though some manage to make a career from it, for one very famous car enthusiast, it became an obsession.

When not starring in The Great Escape, Bullitt or The Magnificent Seven, Steve McQueen was usually seen sat in a driving seat. “It’s always been something close to my heart," he explained. "I don’t think that there’s any race driver that can really tell you why he races. But I think he could probably show you."

McQueen did just that with the 1970 film Le Mans, a dramatic telling of the 24 Hours of Le Mans race. The film was his chance to combine his two loves, acting and driving.

Held annually since 1923, 24 Hours of Le Mans is the world’s oldest endurance sports car race and McQueen was desperate to get in on the action. After being unable to compete, due to insurance problems, he cleverly did the next best thing. He’d make a film, play the lead character, and get said character to race Le Mans. A genius move, and one he could get away with considering his fame at the time.

Then, they beat Brazil with Reynolds grabbing a last-minute winner in which he nutmegs Neymar. Now that only sounds unrealistic because we just don’t know how good Ryan Reynolds is at football. But, Steve McQueen really could drive, and he was itching to prove it.

In preparation for the film (and before the insurance boys could jump in) McQueen entered the 12 Hours of Sebring race in Florida, driving a Porsche 908 – the car that he would drive in Le Mans. The race, considered one of three major endurance sports car races along with Le Mans and the Daytona 24 Hours, is no easy ride. McQueen had the drive of his life and finished second, behind only former F1 World Championship winner, Mario Andretti.

Amazingly, at the 12 Hours of Sebring, McQueen raced with a foot in plaster after breaking it in a motorbike race a week before. “I got the cast on and taped it up,” he said.

The Le Mans film tells the story of Michael Delaney, an American driver returning to the race a year after a crash which left his former rival dead. Delaney, who feels personally responsible for the accident, is looking to make amends. While the film didn’t perform well at the box office, it’s remembered as a classic and is regarded as the best film about motor racing ever made.

McQueen never shied away from involving his love for motor vehicles in his films, from riding the most famous motorbike of all time in The Great Escape, and in Bullitt, the film that invented the car chase.

Like lots of us, McQueen loved to drive and his story is a great example that proves driving is bigger than borders, jobs or status. Mind you, not all of us are as lucky as McQueen or the Ice Road Truckers, we haven’t been able to make a career out of it, yet.