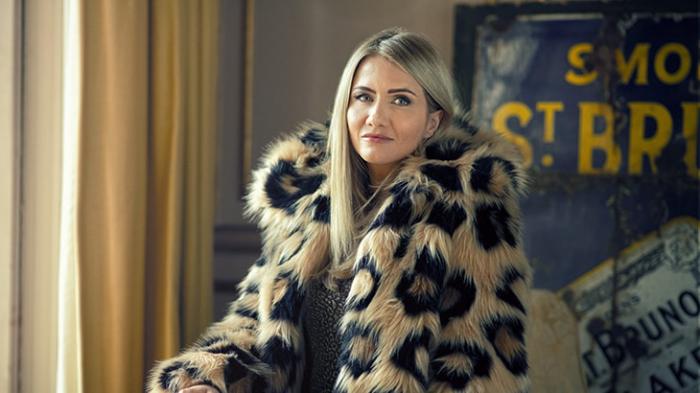 Ian and Butzy are searching for treasures in Ireland’s largest county - Cork. They go picking at an 11th Century castle built by the grandson of Brian Boru, high king of Ireland. Undeterred by its turbulent past and tales of ghosts Ian discovers a mysterious stone head, a carving of a famous figure from Irish mythology, and a gadget he just loves even though it dates not from the 1060s but the 1960s! At Blackwater Antiques he deals hard with antique dealer Mike Geurin to get his hands on some wonderful Irish pieces from the early 20th Century. Vintage Vinny and Max travel down to join Ian and Butzy at Bantry Bay market which attracts dealers from all over Ireland and the UK and Ian has a field day trawling through the stalls.

It’s off to the dramatic scenery of County Kerry for dealer Ian and Butzy to see what Irish memorabilia he can invest in to turn over a profit. His first pick is to Curran’s pub in Dingle which has been in James Curran’s family for four generations. It’s a struggle for Ian to get James to part with items at reasonable prices, but after some fierce haggling deals are struck. Ian and Butzy have a boat trip to see the local celebrity – Fungi the Dolphin – and then wend their way through the Kerry Mountains to Killarney Antiques where Ian meets his match with antique dealer Pat O’Connor. On their way back to Dublin, office manager Ali calls in with a detour for the lads to go to the Kerry Bog village which is opening its doors to dealing for the very first time – an opportunity Ian can’t miss.

It’s a long, long way to Tipperary for Ian and Butzy in their search for the very best of Irish pieces, but the trip is worth it when Ian negotiates many successful deals at Killeneure Castle. It’s not plain sailing as owner Eavunn Carmody has been an antique dealer herself and knows the price of her Irish collectibles. It’s all rock n’ roll in Limerick City with Kieran Murray, a former music promoter and nightclub owner. Ian is very taken with various pop memorabilia from U2 and Thin Lizzy, but his biggest outlay is for a bar that film star and hellraiser Oliver Reed drank at… and there’s photographic evidence to give it true provenance. And before they return home, office manager Ali phones in with a heavenly pick off a religious business that has been specialising in decorating churches since the 19th Century.

Doing business with other dealers is at the heart of the antique and collectible business, and today Ian is travelling all around the country to find the very best items to buy and sell on for a profit. He’s also on the search for a very special antique for a friend and contact in the US – celebrity tattooist Mark Mahoney – whose clients include Johnny Depp and Angelina Jolie. In his quest to find the right object for Mark, Ian buys a range of historical Irish pieces – including some trench art from WW1, a portrait of a cooper at the Guinness Brewery, chairs from St Patrick’s Cathedral in Dublin and some medals from an Irish Revolutionary and spy…. But when Mark arrives at Mulligans HQ will he like what he’s shown and be prepared to pay top dollar?

The Irish Pickers are in the very west of Ireland in County Mayo, visiting an antiques and rare bookstore run by Roger Grimes in the small town of Mulranny. Ian spends more than a penny on an antique toilet bowl, and he’s tempted by an ancient treasure chest possibly left behind from the time of the Spanish Armada. After a spot of fishing at Clew Bay the lads head to a pub in Swinford where, bizarrely, there’s a framed print promoting abstinence, but can Ian spirit up the cash to buy this unique piece? The final stop off is at Charlestown at an antiques shop where Ian discovers some fascinating political memorabilia.

The boys’ first buying trip today is on his home turf of Dublin, where they visit some old contacts in the antiques corner of the capital and cut some great deals. Ian sells an antique clock to one of Ireland’s oldest pubs, the Brazen Head, where he turns over a profit of €325 in less than a couple of hours. Ian and Butzy then journey to Waterford to a salvage yard situated on the striking coastline of the Celtic Sea. There are remarkable discoveries made at this remote location including a €10,000 portrait and a pulpit that the Rev Ian Paisley reputedly preached from. And in Waterford there’s the county’s world-famous crystal to bid on at a busy auction. Back at Mulligans office manager Ali researches some of Ian’s best buys.

It’s an exciting week for Ian and Butzy as they cross the Irish Sea to the north of England to invest in mid-20th Century vintage and retro furniture which is much more plentiful in the UK and cheaper than in Ireland. Office manager Ali packs them off on the ferry and the lads set off on a buying spree around Manchester and Liverpool. Ian is on a roll at Pear Mill Antiques in Stockport where his current fashion trend blends in with 1970s gear to be found at the retail outlet. At Nic Nacs in Warrington it’s a Victorian set of prison doors that takes his fancy and Ian feels it would be criminal to return without them to Ireland. But it’s Vintage Vinny’s contact at In Situ in the heart of Manchester where he really splashes out on some extraordinary items. And there’s one place the lads are determined not to miss on their trip to the UK - Old Trafford, home of Manchester United… where they pay homage to footballing legends and one of Ireland’s home-grown greats – George Best.

The lads are in Northern Ireland, and kick off in the capital city, Belfast, home to the shipyard Harland and Wolff, which built one of history’s most famous ocean liners, the doomed SS Titanic. Ian finds a shop that has a treasure trove of maritime memorabilia. Next stop is an auction south of the border in Cavan where he bids for some turnstiles from the famous Dublin stadium Croke Park. Office manager Ali sends them back off to Ulster to a replica of a 19th Century thatched house where Ian is in awe of the recreation of a traditional rural Irish home.

Top Dublin dealer Ian Dowling and his mate Butzy head south of Dublin to County Wexford and three picking locations. In Wexford town they visit theSky and The Ground pub where hoarder Landlord Johnny Baron’s wife Nuala thinks it’s time for a clear-out of her husband’s cluttered attic. At Loch Garman antiques the boys meet up with owner William Plummer, who’s recently opened his doors to the public and Ian is the first dealer through the door. The guys then pay a visit to Neville’s garage in the heart of the Wexford countryside, showing Ian an amazing collection of 100 years of motoring history built up by three generations of Greg Neville’s family.

Ian and Butzy make a trip across the Irish Midlands towards County Galway. They attend an auction which is selling fittings from the 1914 cruise ship Britannic, sister ship to the Titanic, the original bar is listed at €300,000! At Castle Ellen, an old stately home near Athenry in County Galway, Ian works hard to prize away objects from profuse collector Michael Keaney. Michael wants to hold on to his collection, but his daughter Deirdre is keen for Ian to buy as much as possible. At Dartfield House – an equestrian centre specializing in Connemara Ponies - Ian tries to land deals on some equine art but manager Dorothy Leahy is slow to release the reins on her favourite pieces. After much haggling deals are done and Ian has a nerve-jangling ride around the paddock on one of the centre’s resident ponies.