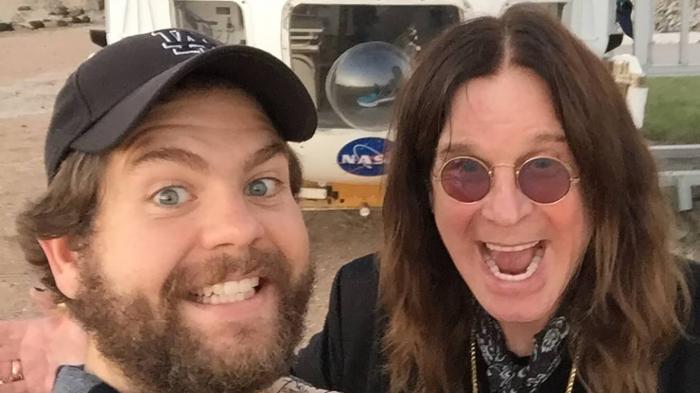 Having been on tour as the lead singer of Black Sabbath for most of his children’s lives there wasn’t much time for family trips. But now Ozzy is finding a better work-life balance and is taking a road trip across America with his son Jack.

BLAZE spoke to Jack about the series and what it was like hitting the road with Ozzy.

How did Ozzy like being back on the road?

Jack Osbourne: 'My dad is used to operating in a certain kind of level of comfort that when you’re working in this kind of TV you just don’t have. He’s not doing a national tour with Black Sabbath when we’re working, so there are no private planes and a whole bunch of people to run after him, so it was a bit of an adjustment for him.

What was the most challenging part in filming the series?

Jack Osbourne: 'Probably the most challenging thing, there was stuff like when we went to the Alamo and then all of a sudden there was like a mini riot, that was pretty challenging; we kind of had to navigate.

'Certain places – we’d go to Japan, for instance, and we could walk around the street [and so on whenever we’d want in public and it was no problem, but then certain places in the US you bring a camera out anywhere and it gets a little crazy.

'So, it was figuring out what works and what doesn’t work, and what part of the world can we get away with things that we can’t in, you know? What can we do in America that we can’t do anywhere else? It was kind of finding the sweet spot, probably.'

What were the funniest moments for you in the show?

Jack Osbourne: 'It’s always the most inappropriate stuff, like that’s the stuff where you kind of sit back and laugh your arse off. My dad is really sarcastic and he makes really inappropriate jokes at times. There is a lot of stuff that we just couldn’t put on the air because it’s just too crass or just a little too adult humour for television.

'Every night after filming for the day, me and my dad and a lot of the crew would all go to dinner. Those dinners when the cameras aren’t around are usually pretty funny.

'My dad likes pulling pranks on the crew, and there was one guy who worked on the show that every single time we sat down at a restaurant my dad would tell the restaurant it was his birthday, and they’d bring out a birthday cake. This guy literally had, like, 60 birthdays over a 10-week period.'

What was the most surprising thing that you had to do on the show?

Jack Osbourne: 'Because I’m one of the producers on the show I knew pretty much everything that we were going to do. I think the surprises were more on my Dad and how he would react to certain things. Most of the time we thought, ‘He’s going to get really ticked off,’ and he wasn’t really going to be into it, and then he’d surprise us all and he’d be like, ‘This is amazing.’ (Laughter) It would be things like that, but for the most part I like to think that there weren’t any tragic surprises.'

You travel around the world to know more about history – and about each other. What was the most important lesson?

Jack Osbourne: 'I think, in a historic perspective, what I learned was that pretty much everything we’re taught in school is like the cartoon version of how history really is. History is really gruesome and violent; it is not very glossy.'