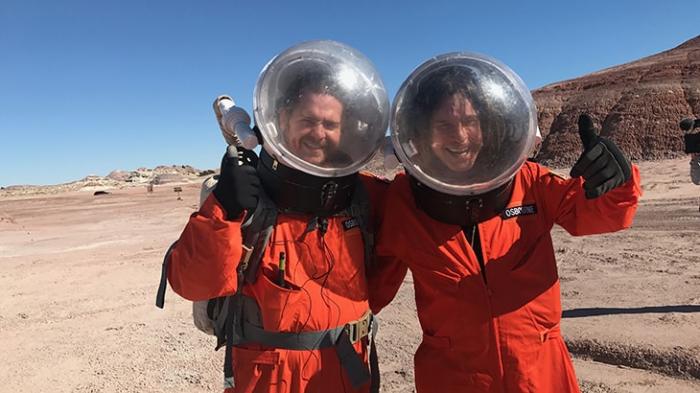 Ozzy and Jack venture to historic Jamestown, Virginia. Jack is determined to find out whether any Osbourne’s were among the first British colonists in America, but Ozzy is obsessed with the idea of that the early settlers (and potentially his distant relatives) resorted to cannibalism. On the road to Jamestown the guys take a couple of detours so they can drive a WWII tank, visit Stonewall Jackson's arm, and shoot their way through Colonial Williamsburg.

In 1982, something happened at the Alamo that instantly became both Rock & Rock lore and a bold question mark in the Osbourne family history. So, nearly 35 years later, Jack and his dad head back to the "scene of the crime" (against Ozzy's wishes and warnings) to uncover the truth and hopefully rewrite history. Along the way the guys take a couple of detours, including NASA's Johnson Space Center, where they test drive the new Mars Rover, and a stop at the Museum of Funeral History.

Ozzy and Jack are on a road trip to Mt. Rushmore. Jack wants to get an up-close and personal look at the historic site from a helicopter, but Ozzy wants nothing to do with it. So, the two settle their differences the ol' Wild West way: a quick draw shoot out. On the road to Rushmore, father and son pan for gold, go inside a Minuteman Nuclear missile site, detour through Deadwood to visit Wild Bill Hickok's grave and get face to face with Crazy Horse.

It's Ozzy's birthday and Jack has a big surprise in store for him. Only problem is, Ozzy hates surprises. So, Jack's pulling a lot of strings to put together a perfect trip for the Prince of Darkness. On the agenda: medical oddities, a penitentiary, chocolate making and voyage 220 feet underground, where Jack will reveal his biggest surprise - a relic from Ozzy's past.

Ozzy and Jack's bucket lists collide when father and son head to the UK. While both want to visit Stonehenge, the mythic structure of Druid lore, the rest of their itinerary is up for debate, and both Ozzy and Jack each want their way. Will Ozzy get his hands-on Alan Turing's famous Nazi code breaking machine? Will Jack convince his dad to go to the newly found remains of a Neolithic monument known as "Superhenge"? And will Ozzy let Jack pursue his dream of getting his dad knighted?

Since Ozzy has a concert in Japan, father and son set out on a historic Japanese adventure. Driven by Ozzy's obsession with samurai swords, the guys go in search of a Samurai Master. Along the way, Ozzy secure a rare invite by sword master Isao Machii to try their hand at forging a kitana blade. Then, Jack wants to get a Tebori tattoo from a legendary tattoo master of the ancient art form. But will he be able to convince his dad that he too should get jabbed with a sharp stick for hours on end, as a ritual to mark their father-son bond?

Ozzy agrees to go to one of Jack's favourite cities, if they'll be able to get a tour of the White House. So, while Jack scrambles to get access to 1600 Pennsylvania Avenue, he and his dad take a bunch of detours. On the itinerary: the FBI Training Facility in Quantico, little known park featuring the heads of America's Presidents, a local legend who calls himself Little Ozzy, and the residence where Ozzy's idols The Beatles partied after their first concert in America.

For more than 50 years Cuba has been off limits for travellers coming from America. But now the doors are open and Jack & Ozzy are heading to the country of revolution and cold war agitation to get a look at some history that’s been hidden away. From rolling fleets of American automobiles to cold war weaponry; From Ernest Hemmingway’s house to the presidential palace, there is a lot on the itinerary. But, Jack won’t be satisfied until he can convince his dad to help him bring home a little bit of Cuba in his suitcase.

Ozzy and Jack pack up a camper and travel to the home of all things UFO -- Roswell, New Mexico. While Jack is a true UFO believer andloves camping, Ozzy is a sceptic and loathes the outdoors when it's freezing cold. But Jack's certain that the experience will further deepen their father-son bond. On the agenda: the Petroglyphs National Monument, a UFO Museum and the famous Roswell crash site/debris field. This will air as part of UFO Week from the 29th June till 5th of July on BLAZE.

Ozzy and Jack hit the birthplace of Rock N Roll: Memphis, Tennessee. While Ozzy is excited to see the historic Sun Studios, Jack wants to take his dad on a detour to a more infamous site - a place where legend has it, the devil struck a deal that ultimately changed the course of music history. Plus, a special gift from a legendary instrument maker prompts Ozzy to unleash a bit of his own musical wizardry.