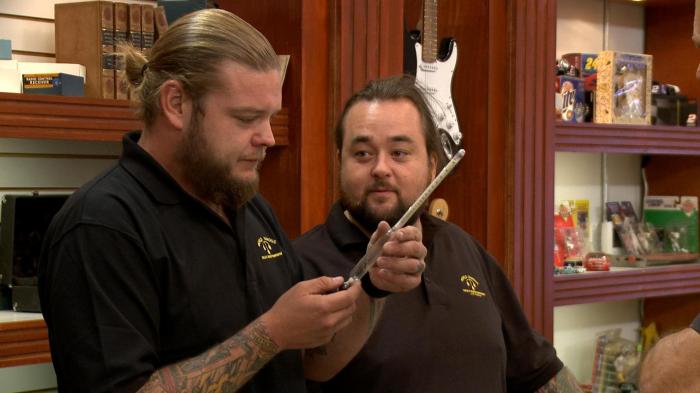 Listen to them talk and you'd think that the lads at the World Famous Gold and Silver Pawn Shop on the Las Vegas strip know everything. Yet while the Pawn Stars crew are smart cookies, sometimes the prize items they covert and buy are worth less than a packet of double chocolate chip Marylands and they get ripped off. Sometimes that's just the way the cookie crumbles.

Other times, the guys spot the fakes and know better than to part with cash for the fakery. Being a pawn shop in the most money-thirsty city on Earth, plenty of forgeries have come through the doors of the shop over the years...

Here are some of the most memorable:

That was the reality some poor sucker called Madison had to face back in 2014. Even the authentication papers he had from a professional entomologist (insect nerd) were fake.

Maddy had wanted fifty grand for it. He got… nothing. He didn’t leave the store with nothing, though. He actually left with minus two hundred dollars after paying for the ‘gemstone’ to be professionally examined by the Gemological Institute of America. Bless.

Not only was Beatle John Lennon a top drawer musical artist, the man was also a pretty talented artist-artist. He went to art school and everything. Being one of the world’s most famous ever men and, well, dead - his drawings are now worth a pretty penny.

Forgeries of his drawings, however, are worth significantly less.

The series 13 episode ‘Under Pressure’ saw a very proud music fan bring in his ‘very rare signed John Lennon artwork’. The drawings consisted of six miniature pen-drawn self-portraits which the buyer picked up for a cool $10 from a charity shop. But you know that saying about things being ‘too good to be true?’ Well, yep. That.

The guy wanted $20k. Rick was keen but before he was willing to talk numbers, he gave the thing a look. Something was off about the paper… then he realised. It was Kodak printer paper. Something which didn’t exist in John Lennon’s lifetime. It was a fake. As for the customer? It was a hard day’s luck.

Claude Monet was a French artist who was born in 1840 and generally regarded by the art world as being one of the founder members of the hugely influential Impressionist movement. His paintings sell for tens of millions and adorn the walls of some of the world’s most prestigious galleries. They generally don’t find themselves being hawked in Vegas pawn shops.

So when one found its way into the store, it was - of course - a forgery. If it wasn’t, we wouldn’t be featuring it here, would we? How did the expert know? Well, it was surprisingly easy to tell, as it goes. The back of the canvas was clean. Meaning no paint had seeped through. The materials that Monet used would have bled through. It was a fugazi.

The ‘Mary and Abe Lincoln’ Photo

If you had a ‘one in a million’ item, how much would you want for it? Exactly, you’d want one million for it. That’s what the cock-sure chap who strolled into the shop with a framed photograph of Abraham and Mary Lincoln wanted. A cool one million bucks.

Now the fellas in the shop were never going to hand over a mil, but they admired the seller’s chutzpah and bartering strategy. They were keen but, as they sensibly do, they wanted proof that the snap was genuine. So they called in an expert who examined it and, using special facial recognition software, the woman deemed it a fake.

The man with the photo was faced with the prospect of changing his asking price from $1m to around the price of a cup of coffee. He did no such thing, though. Instead, he did what any optimistic gambler does in Sin City after losing a hand and decided to double down.

He refuses to believe the expert, opting to tell her instead that, in fact, he is more of an expert than she is. 'It's your career,' he tells her. 'You have the right to discredit yourself if you want to.'

The dude left empty-handed. Well, not entirely empty. He was holding a totally worthless fake photograph of Abe Lincoln.