Chumlee’s Net Worth (And Other Fun Facts) 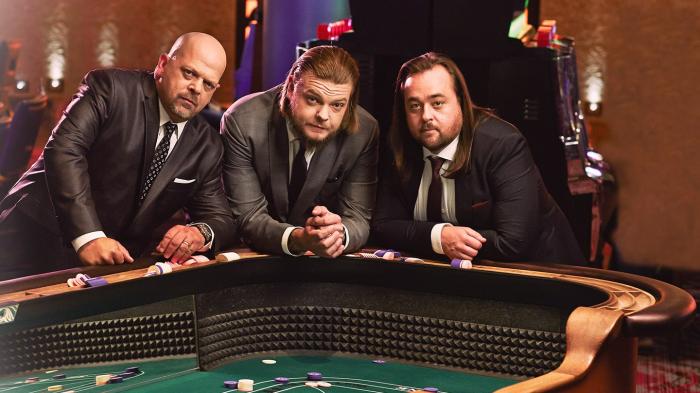 Pawnbroker, reality show superstar and world-renowned sneakerhead (which, translated into British, means someone who really, really likes trainers), Chumlee is the Renaissance man of the Pawn Stars crew. Sure, the others may have tons of historical knowledge and haggling know-how, but Chumlee also brings other things to the table. Things like easy-charm, iconic facial hair, and a deep working knowledge of pinball machines.

He’s also absolutely loaded. Which is just as well, given that he’s never seen a pair of trainers he hasn’t wanted to buy. Read on to find out how much he has to his name, along with some other essential facts on the man, the myth, the Chumlee.

Chumlee – real name Austin Lee Russell – has certainly come a long way since he was just a lowly lackey behind the counter at the pawn shop. He’d actually been working there for five years when the TV series came calling, promptly bringing him fame and a pretty chunky fortune. And you couldn’t accuse the man of being a miser about it – he’s splashed out on a car collection any petrolhead would envy, with a Rolls-Royce Phantom, Maserati GranTurismo and 1964 Impala SS among the impressive sets of wheels he’s bought over the years.

2 His nickname was inspired by a cartoon walrus

Cynics who think Chumlee was given a quirky nickname for telly purposes: allow us to put you right. He was actually dubbed 'Chumlee' as a kid, when a friend’s dad said he looked a lot like cartoon walrus Chumley, from the 60s children’s series Tennessee Tuxedo. Not the most flattering comparison maybe, but name stuck. And when someone came to the pawn shop with a rare animation cel from the series which actually depicted Chumley, Corey Harrison snapped it up in honour of his best pal. Rick Harrison was less than impressed, calling it a stupid purchase. Chumlee’s response? 'Don’t be mad because you don’t have a cartoon of yourself.'

3 He owns his very own sweet shop

While Chumlee will always be best known as the living mascot of the Harrisons’ pawn enterprise, he also has a few sidelines of his own. One of them is a big old sweet shop right across the street from the pawn emporium, with the rather delightful name of Chumlee’s Candy on the Boulevard. It has every sugary delicacy you could want, including a whole load of saltwater taffy. Which, like grits, is a foodstuff destined to remain shadowy and mysterious to Brits.

Another Chumlee side-project is his career as a hip hop DJ. Citing the likes of Deadmau5 as among his inspirations, Chumlee is actually a regular presence at clubs and bars in Nevada. Who knew? (Well, we did, and now so do you.)

Think Pawn Stars and the image of Rick Harrison folding his arms sternly might pop into your mind. But it’s actually Chumlee who’s arguably the biggest breakout star of the show, generating no end of Chumlee merchandise and even Chumlee tattoos. 'We’re all successful,' he once said in an interview, 'But think about it. Would you rather have Rick’s bald head on your stomach or a beautiful, sexy Chumlee shirt?' Who are we to argue with that?