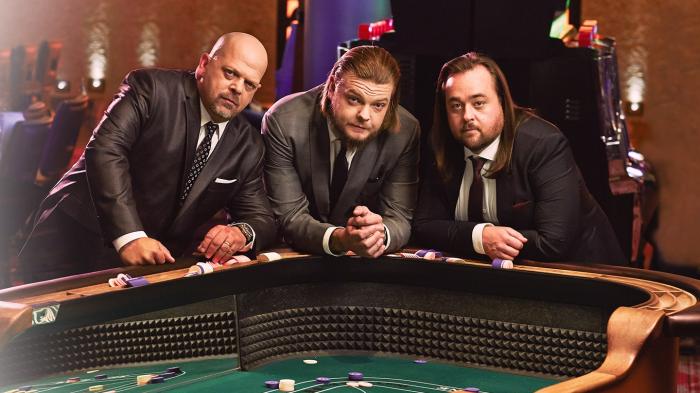 The magic of Pawn Stars is you never know who’ll be coming through those famous doors next. Sure, they’ll often be blaggers and chancers trying to make a mint from a 'limited edition' item which turns out to have fallen out of a cereal box circa 1996. But every so often someone will come in with something so valuable, it almost brings a tear to Rick’s eye (especially when he forks out for it). Here are five of the biggest deals struck on the show.

What do you do when a very old man wanders into your shop and introduces himself as 'Uncle Phil'? If you’re Rick, you nod cautiously, with a slightly bemused/worried expression on your face. But this wasn’t some random crank – 'Uncle Phil' was actually in possession of a stunning 1932 Lincoln Roadster, a vintage supercar which was boldly built at the height of the Great Depression. 'Uncle Phil' wanted $100,000 at first, but was talked down to $95,000, which he then immediately spent on a big bag of gold from the Harrisons’ coffers. As you do.

Rick sure does love his motors, and he was beside himself with excitement when presented with a Shelby GT 350, similar to a car made famous by the Nicolas Cage movie Gone in 60 Seconds. It was, to quote our resident petrolhead, 'one of the quintessential cool cars of the 1960s'. The glove compartment even bore the giant autograph of legendary car designer Carroll Shelby. The seller wanted $125,000, Rick offered $100,000, and the wincingly expensive deal was done.

3 The Everlasting Gobstopper (and a Wonka Bar)

Rick felt like he’d entered a world of pure imagination when he was presented with a collection of props from the original Willy Wonka movie. They included an actual Golden Ticket featured in the film, Wonka bars (made of wood), and even Gene Wilder’s top hat, which Rick obviously had to try on for an awkward selfie. 'He had a small head,' Rick mused, 'Or I might have a fat head.' The asking price for the whole collection cost $725,000, but Rick limited himself to a Wonka bar prop along with the centrepiece of the collection: the Everlasting Gobstopper itself. Let’s just hope Slugworth doesn’t come looking to steal it.

2 A whole load of silver

When a particularly canny investor came to the shop looking to cash in on his haul of silver coins and bars, both Rick and the Old Man were intrigued. There was over 3,000 oz of silver there, which the guy had bought back in the 90s when prices were low. But was it the real deal? Rick gave us a quick masterclass in determining the purity of silver bars (you drill it, melt down the filings, then add nitric acid – pure silver turns a creamy white, apparently). He then expertly haggled the price down to a 'mere' $111,000. All in a day’s work for the big guy.

1 Where the Wild Things Are illustrations

Maurice Sendak’s Where the Wild Things Are is one of the most famous and beloved children’s books ever written, so it’s little wonder Rick was almost lost for words when he was presented with Sendak’s original illustrations from the book. The dealer wanted $375,000, which Rick – proving himself a master of understatement – said was 'slightly pricey'. Not that he was put off – he ended up splurging a whopping $250,000 on 'one of the coolest things I’ve ever bought.'