Pawn Stars: Rick and Chumlee on what's it really like working together? 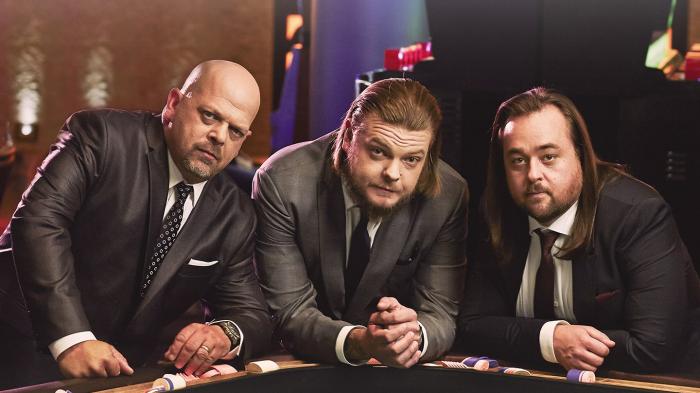 Rick Harrison first welcomed viewers to World Famous Gold & Silver Pawn Shop in Las Vegas back in 2009. Eighteen series and six hundred episodes later, fans are still tuning in to see what weird and wonderful items end up on Rick’s counter and whether he’ll part with the cash or send them packing.

BLAZE spoke to Rick Harrison and co-star Chumlee about Pawn Stars' enduring popularity and what it's really like working in the most famous pawn shop in the world.

BLAZE: What do you think makes the show so popular?

Rick: Because everyone wants to watch a show about three fat guys in a Pawnshop. No, I think the reason it’s popular is because people love to learn. They just like to learn from an uncle, not a professor.

It sort of like a game show as well. First round: Is it real? Second round: How much is it worth? The bonus round: Call in an expert!

We keep it interesting. It's also not like a motorcycle show or a car show. There are only so many things you can do to a motorcycle or a car. Truly every episode is different.

In Season 17, you finally get your hands on 'The Object', [the black obelisk that features on the cover of Led Zeppelin's album, 'Presence']

That was pretty incredible. I always thought it'd be pretty cool to have one, so I spoke to a producer and said it'd be cool to go on a quest for ‘The Object’. And we ended up getting it.

Are there any other Led Zeppelin memorabilia you'd like to get your hands on?

Isn't Chumlee is an expert on pinball machines?

Rick: To a degree, he knows more about them than I do. I still buy the new ones. I grew up with them, so I still like playing them.

Chumlee, what's one item you dream of owning?

Chumlee: I would pick Rick's Viking bracelet (that he won't give me). That's probably the thing I want most in the world. I don't want a lot of things but I really want that.

Rick: I have a 1200-year-old gold bracelet that's from a Viking hoard from the UK. You know in the UK like every few years, farmers plough the field and they find some Viking stuff that's gold everywhere.

Chumlee: We've worked together for almost 18 years. We've been on television for 11 years. So, our relationship is pretty much: Rick tells me what to do and I try not to do it and pretend like I am.

Chumlee: We have a good working relationship. He's a good boss, you know, a good father figure.

And as an employee, Rick what is Chumlee like?

Rick: He's a good guy. Most of the time he's a hard worker. Yeah, occasionally, he just disappears. I just don't know how he does it.

Chumlee, tell us how you first started working in the shop?

Chumlee: So, at the time I was assistant manager at McDonald's. Rick decided he was gonna buy a Quiznos [a subway sandwich restaurant ]. They approached me to run it and did that for a while and I pretty much started working at the pawnshop right away. I worked five days a week at Quiznos and it closed at five o'clock and then I drove three minutes to the pawnshop. I did that for 135 days without a day off.

Right about the time, Rick got rid of Quiznos and I was working full-time at the shop, the show picked up and you know the rest is history.

What advice would you give to someone who wants to work in your business?

Chumlee: Listen to people like Rick who know what they're talking about

Rick: There's a lot to learn. The other big thing is don't think you know everything. If you're not sure, have it checked out by someone who does. There are so many fakes. They've been faking things for 1000s of years. When the Romans invented green glass, suddenly there were emeralds everywhere!

What's the funniest thing Chumlee has done on the show?

Rick: Chumlee is a comic genius he can make anything funny. He has the natural ability to just push my buttons and he can figure out, how to piss me off in like five seconds. It's pretty amazing.

Chumlee: It's just to get a rise out of you. I understand people well that's my best talent. I think that's one of the reasons, people like the show because it’s so natural and so fun. This is the way we are normally. It's not like we're having to act on television to get those genuine moments.

What's your favourite deal you've made on the show?

Chumlee: I've done a lot of good deals in my day and I've done a lot of bad deals. But what people don't realise is say there are 100 items in a season there are another 1,000 that come to the shop during that period. That is just one season and we're at 18 seasons now with 600 episodes. It's not just an episode for us it's an actual job you know we're doing it all day.

Rick: I think we've had something like 3000 different items on the show. And there are 3000 different people selling stuff, so I have people walk up to me all the time saying, 'Hey Rick. How's it going? Remember that time I was on your show. I was on episode 286,' and I'm like, 'No'.

Chumlee: I wish I could remember everything but, I mean, fortunately, we're still going and still making new episodes so, you know, I got to make room in my little brain for new stuff.

What are your recents highlights from the latest seasons of the show?

Rick: Me and Chum were in Rome that was a highlight. There's was a lot of travel it was a real blast.

Chumlee: I will say the last three seasons have been really fun. It's been fun forever but these last few seasons, we're all having such a good time and I think comes across in the episodes. It just keeps getting better and better.

Are you working on any other projects outside the show that our viewers might be interested in?

Chumlee: I've got an online candy business and a hot sauce.

Rick: I've got my restaurant, Rick's Rollin' Smoke BBQ that was voted best barbecue in the state of Nevada. and I've got a couple of other TV shows I'm working on with Rick Harrison productions. The pawnshop does a lot of stuff on the internet now because of COVID. Me and Chum both do Cameo [An app where fans can hire celebrities for personalised video messages].

Chumlee: It's good fun, I'm doing stuff for people on Cameo all the time. It's so cool like a fun little birthday present.

What's the weirdest thing you've been asked to do on Cameo?

Chumlee: Corey gets the weirdest ones. I think Corey had to break up with someone on Cameo before

Rick: He's broken up with a few people on Cameo. I've had some people ask some really weird things. Someone broke up with their spouse and wanted me to convince him to get back together. Ones like that I decline.