History of snooker and pool 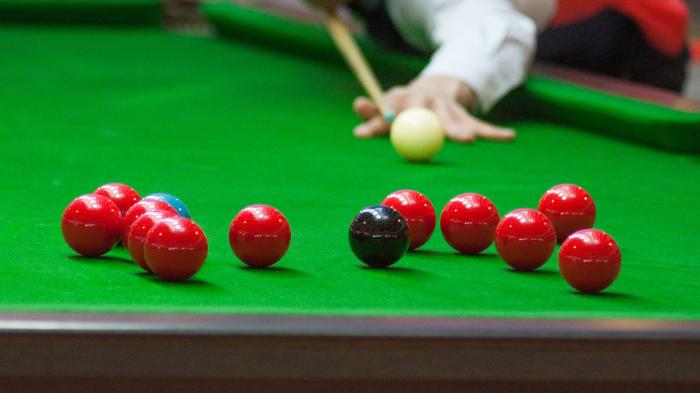 It was in the officers' mess of the British Army’s 11th Devonshire Regiment stationed in the Indian town of Jabalpur (Jubbulpore as it was then known) in 1875 that lieutenant Neville Francis Fitzgerald Chamberlain created the game of snooker. Whilst experimenting with the existing game of black pool (a form of billiards), which consisted of 15 red balls and one black ball, Chamberlain threw down additional coloured balls and a new game was born. Having heard that rookie cadets studying at the Royal Military Academy at Woolwich were given the slang-term ‘snookers’, Chamberlain observed that all those present playing this new version of black pool were ‘snookers at the game’ and the name immediately stuck.

In 1885, John Roberts, the then British Billiards Champion, visited India and met with Chamberlain during a dinner with the Maharajah of Cooch Behar. After enquiring about the rules of snooker, Roberts decided he would introduce the game back in England. Although it took many years before the game became widely played, by the end of the 19th century the manufacturers of billiards equipment had realised the commercial potential of snooker.

1916 saw the first official snooker competition take place, which was the English Amateur Championships. The first important professional event took place in 1927 and was won by Joe Davis, the first snooker superstar. Davis won the Professional Snooker Championship (which later became the World Snooker Championship) for 15 consecutive years and was instrumental in helping to grow the popularity of the game. By the 1930s, snooker had overtaken billiards as the most popular cue sport in the UK.

After a short slump in popularity during the 1950s, Snooker was put back on the map with the introduction of Pot Black in 1969, a BBC television series of annual snooker tournaments shown in colour.

With the emergence of stars such as Dennis Taylor, Ray Reardon, Steve Davis and Alex “Hurricane” Higgins, the final of the World Snooker Championships was soon drawing in millions of viewers worldwide and had found a new permanent home at the Crucible Theatre in Sheffield. Snooker clubs were opening up all over the country and sponsors rushed to invest in the new popular sport.

Although a ban on tobacco advertising in sport during the 2000s initially reduced the number of events and sponsorship money, the World Snooker Tour has bounced back considerably since 2010, when sports promoter Barry Hearn acquired a controlling interest in snooker's commercial arm -World Snooker Limited.

Pool, more formally known as pocket billiards, is the umbrella term for a number of cue sports and games played on a six-pocket pool table, including eight-ball, nine-ball and straight pool.

The earliest recorded playing of a recognisable form of billiards was in France in the 1340s. Played as an outdoor lawn game similar to croquet, it eventually moved indoors and onto a wooden table with green cloth to resemble grass on which it had been previously played. By the early 18th century indoor billiards was a favoured past time of the French nobility and English gentry.

By the 19th century the cue had developed into the form of which it is known today aided by advances in technologies come about during the Industrial Revolution.  There were many variations of the game by this time with some making use of obstructions and targets whilst others relied on the table cushions alone, such as carom billiards. Another obstacle/target had also been added to the table in the form of pockets, giving rise to pocket billiards.

The earliest version of pocket billiards was played with only two balls and the players would each take a ball and try to pot the other. Up to a dozen players could be involved in a game at any one time, each with their own cue and ball playing in a fixed rotation. To differentiate between each player’s ball, they were often numbered and stained with a dye. The range of colours included white, red, yellow, green and brown with blue, pink and black coming at a later date. After these colours were used, more players could enter by adding coloured balls with a cross or a spot.

The word “pool” means a collective bet or playing for money and during the 19thcentury American poolrooms were betting parlours for horse racing. Pocket billiard tables were installed in them so patrons could pass the time between races but soon enough the word pool had become attached to the American form of pocket billiards. The first pocket billiards championship was played in 1878 with the dominant form of the game being American Four-Ball Billiards. Professional players became so well known that cigarette cards were issued featuring them.

The most famous pool game, eight-ball, was invented shortly after 1900. A decline in popularity of the sport occurred post WW2, but pool was revived after the 1961 film “The Hustler” featuring Paul Newman as a pool hustler was released. New poolrooms opened across America coinciding with the creation of coin-operated tables helping to give the game a large boost.

Pool is now frequently televised on U.S. and international networks. Nine-ball is the favoured championship game of choice due to its fast-paced nature, suited for TV and audience engagement.