The 'truth' behind the hollow earth conspiracy theory 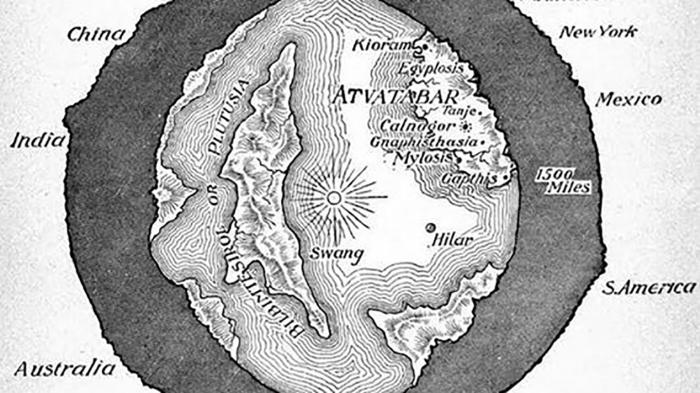 The archetype of the ‘wacky conspiracy theory’ nowadays is the Flat Earth Theory. Those people that refuse to believe that the world is spherical are held up to be the daftest of all alternative thinkers. ‘Flat Earther’ effectively being shorthand for ‘lunatic’ to many.

For some reason, ideas like these seem to anger large swathes of the population who argue that if it cannot currently be proven by science, it cannot be true. While there’s a little logic to that argument, it does kind of ignore the fact that science is only a collection of the best information currently available. New data comes to light every day which proves and disproves various speculations, hypotheses and ideas.

One other thing that the skeptic community are particularly vociferous about is the notion of ‘a Hollow Earth’. You can understand it, to a degree. The science does, admittedly, look pretty strong on this one. But is that enough?

Let’s have a quick look at it ourselves...

Those that subscribe to the notion of Hollow Earth believe that the planet we all live on isn’t as solid as we think. It’s their credence that under the surface of Earth is a giant habitable void. Under the soil we walk on there is an enormous cavity in which it’s possible for humans to not only visit but to make their home (if, for whatever reason, they wanted to).

Some even claim that the gap in the very centre of our planet is home to aliens. Or demons. Or, yes, Nazis. Always with the Nazis...

The history of the theory

Word of the earth containing a subterranean environment in which people, animals, gods or deities can or do reside is as old as humanity itself. The concept exists in folklore and religions across the world. It is, after all, where Hell and Hades are - theoretically - located.

British geophysicist Edmond Halley was the first academic in the west to go on record to suggest that the world may, in fact, be hollow. In 1692 he floated the idea that the Earth might well consist of a hollow shell around 500 miles thick, that then has two inner concentric shells and an empty inner core.

In 1818, American lecturer John Cleves Symmes, Jr. postulated that the Earth had a hollow shell about 800 miles thick and had openings 1,500 miles across at both the north and south poles.

Since then, various people have said similar and a following of the theory has been established.

Part of the reason that the Hollow Earth Theory is so pervasive and hard wearing is that it’s been a feature of science fiction writings for centuries.

Then there’s A Voyage Journey to the Inner Earth, a work of 1908 by Willis George Emerson, William Henry Hudson's 1887 romance A Crystal Age, Edgar Rice Burroughs’ At the Earth's Core and, most famously of all, Jules Verne's 1864 novel Journey to the Center of the Earth.

All these widely-read works of fiction helped build an idea of an empty globe, a real mythos. From that, and the word of some prominent early scientists, the theory has grown and developed.

Rodney Cluff, author of the book World Top Secret: Our Earth IS Hollow says this on the subject:

'My conception of the Hollow Earth, based on my research, is that the shell of the Earth is about 800 miles thick, from the outside to the inner surface. Half the planet is taken up by surface weight, and then there’s empty space, and then, something else.

'Suspended in the center (sic) of that hollow is an interior sun that is divided by day and night sides. The other part of the Hollow Earth theory is that near the North and South pole are substantial openings that lead into the interior.

'More and more people are coming to terms with the fact that the Earth is hollow. I get emails from people learning about it every day. It’s definitely growing in popularity - certainly not in the millions, but maybe in the thousands.'

According to Cluff, there’s something of a rivalry between Hollow Earthers and Flat Earthers too: 'I don’t know how the Flat Earthers can be so confused,' he told The Sun once. 'They are obviously wrong. The world is not flat — it’s hollow. They reject all the evidence.'

We’ve never drilled to the centre of the earth, so no one can officially disprove the theory. Oil wells can drill miles into the dirt, but usually at angles. The true vertical depth of most is around two miles. The deepest drill into the Earth (the Kola Superdeep Borehole in Russia) was 7.5 miles down. Given that the centre is a further 3,992.5 miles away, that doesn’t help. Non-believers can’t point to strict proof...

But while direct observation isn’t possible, most people seeking to scoff at the idea of a Hollow Earth point to the hordes of scientists who are all confident beyond a doubt that our planet is a rock-solid lump of rock. So they’ll tell you that it’s just not true.

What do we believe...? Who knows. It’s certainly a fun idea. If for no other reason than it’d mean we’ve all got a fun new place to go on holiday next year.