Was Ted Cruz the Zodiac Killer? 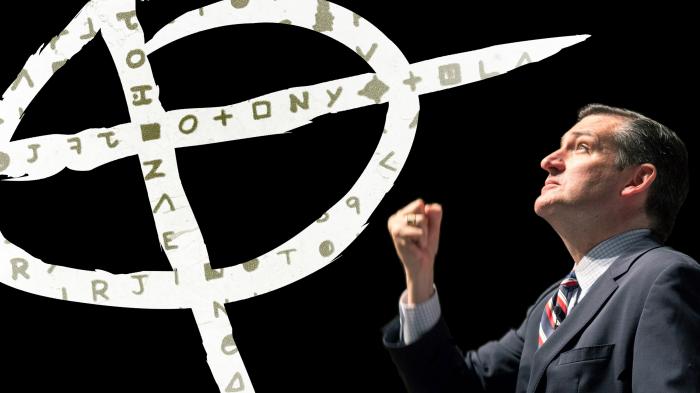 A coldly calculating serial murderer who terrorised California in the late 60s, the Zodiac Killer’s real identity remains a tantalising mystery. And, as with Jack the Ripper, there have been all kinds of suspects named over the years – some less likely than others. Let's consider some of the more unusual suggestions for the man behind the executioner's hood.

If you thought the idea of Jack the Ripper being a member of the Royal Family was a bit far-fetched, how about the theory the Zodiac Killer was none other than US presidential candidate Ted Cruz? Let’s immediately make it clear that this was never a serious suggestion by any Zodiac expert. It was, instead, an off-hand Twitter gag that somehow became a popular meme, to the extent that Cruz himself was compelled to made a cryptic comment about it.

It all began back in 2013, long before Cruz’s run for the White House against Donald Trump made him a household name. Cruz was giving a fairly standard-issue speech at a Republican event, prompting someone on Twitter to say “Ted Cruz is speaking!! His speech is titled: 'This Is The Zodiac Speaking” The person behind the Twitter account later explained to a journalist that he was just making a dig about the “sociopathic vibe one gets when Ted Cruz walks, talks and breathes”.

He could never have imagined how his one, casual, silly tweet would spark off a viral phenomenon, with comments across Twitter and Facebook cheerfully contributing to this brilliant new theory. (Sample tweet: “Why does everyone keep joking about Ted Cruz being the Zodiac Killer? I mean, he definitely is, but like, people died”). While savvy Internet users understood it was just a big ironic joke, a poll in Florida later revealed 38% of voters apparently believed Cruz might indeed have been the Zodiac Killer.

The idea became such a “thing” that Cruz himself couldn’t help getting involved, tweeting an image of one of the Zodiac’s infamous cipher messages. Was this Ted Cruz showing he had a sense of humour, or a taunting admission of guilt? Of course, there’s the minor point that Cruz hadn’t yet been born when the Zodiac’s crimes occurred, although Twitter had a response to that too: “If @BarackObama can fake his birth certificate why can't @tedcruz?” asked one astute observer. “Show us your real birth certificate! #ZodiacTed”

A slightly more feasible (but still radically strange) suspect is another Ted: Theodore Kaczynski, better known known as the Unabomber. Currently serving a whole-life prison sentence in the States, Kaczynski started out as a genius-level scholar who became the youngest assistant professor of mathematics at Berkeley, and looked set to become a major name in academia. Then, out of the blue, he gave up his sparkling career to live in a cabin in the middle of nowhere.

He was far from a harmless hermit, though. Increasingly enraged by developers ravaging the American countryside, he embarked on a bombing campaign aimed at academics, businesspeople and the airline industry which would kill three people and seriously injure many others. The campaign began in 1978, and he became one of the most wanted people in America, stoking his own myth with letters to newspapers which demanded they publish his manifesto. Called “Industrial Society and Its Future”, it was a fierce attack on contemporary civilisation and “the psychology of modern leftism”.

One of the world’s most wanted men, the Unabomber was eventually snared in 1996. But could he really have been the Zodiac? There are certainly some parallels. He was based in the San Francisco Bay area at the same time as the initial Zodiac killings in that same segment of California. He sent letters to the press, demanding publication of his writings, much like the Zodiac did. And the Zodiac’s love of complex ciphers seemed to square with the Unabomber’s mathematical mindset.

Authorities actually took the theory seriously enough to examine the evidence, comparing Kaczynski’s fingerprints with those believed to be the Zodiac’s, but there was no match and most experts file the Kaczynski connection under “unlikely”.

For a number of decades now, one very unlikely suspect has been singled out as the Zodiac: a California university professor called Michael O’Hare. He has been the focus of a very peculiar vendetta by a true crime writer called Gareth Penn, who self-published books delving into the Zodiac case in obsessive detail. Penn developed his conclusions based on complex, mathematical analysis of the Zodiac’s letters and what he regarded as a deliberate geometric pattern created by the crime scene locations.

Out of all of this, Penn somehow came up with one name: Michael O’Hare, who has reacted to the public accusations with utter bafflement. “The decades since Penn fixed his sights on me have not been a living hell, much as that would spice up this story,” O’Hare once write. “They have been an ordinary life, punctuated by one or another flurry of fuss from Penn, sometimes involving pages of numbers (for example, the data pages from my PhD thesis) with this or that sequence picked out, circled, and "decoded" into words that fit somehow into Penn’s model of the crimes.”

Ironically, Penn’s campaign against O’Hare has raised questions about Penn’s own suitability as a suspect, partly because of his obvious obsession with the case and the fact he’s a trained army marksman. As Zodiac Killer expert Tom Voigt once said, “It is the opinion of more than one researcher that Penn himself makes a much better candidate to be the Zodiac than does O’Hare.”