The alluring mystery of the Nazca Lines 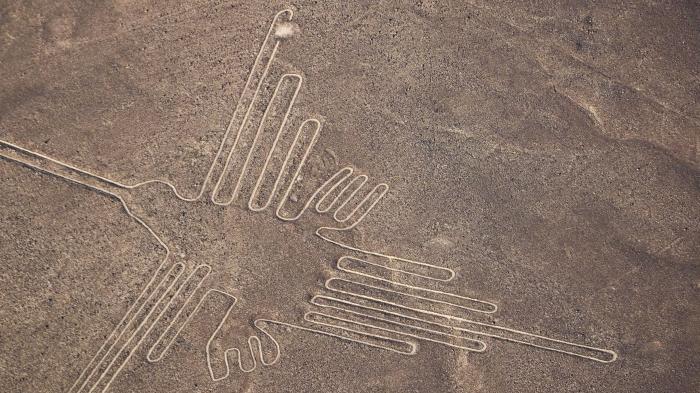 Take a stroll along Peru’s coastal Sechura Desert and you won’t see them. But fly high above the arid landscape some 250 miles south of the nation’s capital of Lima and it’s a different story altogether. You’ll witness the Nazca Lines in all their magnificent, captivating and mysterious glory.

They’re effectively enormous doodles. Giant motifs seemingly drawn into the earth that can only truly be appreciated by witnessing them from above. Which must be fun for the Andean condors that soar through the skies over the Piura region of the country.

They’re called ‘geoglyphs’. Large designs created on the ground that can be seen from the ground but are far more visible and clear from a height. They’re often pictures of people or animals, sometimes symbols. These ones, in Peru, are particularly notable. For their scale and their enigmatic history if nothing else. They’re called the Nazca Lines and no one quite knows how they came to be…

So, they’re lines (that’s where the name comes from, funnily enough). Some 800 of them. There are also wavy patterns, spirals, arrows and other basic shapes. Those aren’t quite as pretty or interesting as the animals, though. There are spiders, birds, monkeys, ducks and even llamas (well, this is Peru). There are also pictorials of humans. Or humanoids, at least. Some suggest these could be etchings of creatures from another planet...

How were they created?

The Nazca Lines are effectively ‘negative images’. They’re not drawn or scorched or marked into the ground. Instead, rocks have been removed to create the geoglyphs. Rocks in the deserts are oxidised, turning them a reddish-brown colour. When the top foot or so of stone is taken away, a lighter shade of earth is exposed. That’s what is visible.

Scientists and historians are fairly sure that the Nazca Lines of Peru - now an area designated as a World Heritage Site by UNESCO - were created by the Nazca people. The Nazcas were a civilisation which flourished in the region between 100 BC and 800 AD.

Now for the interesting bit... THE THEORIES

There are two main and pervasive theories surrounding the Nazca Lines. There are:

Back in the time of the Nazca people, rainfall was absolutely vital for their very existence. Charting the seasons was important, they needed to be prepared for the annual spring rainfall. Aachen University professor of philosophy Maria Reicher believes that the geoglyphs in the Sechura Desert were established as a way to chart the change of the seasons.

The lines seem to point to spots on the landscape where the sun rises and sets. So observing which line tallies up with the rise or set would indicate the time of year and how long it was until rain was due to help with crops.

Now we’re talking... Erich von Däniken’s famous book from 1968 ‘Chariots of the Gods? Unsolved Mysteries of the Past’ is something of a Bible to those that believe in ancient aliens. In it, the Swiss author puts forward the idea that the Nazca people created the lines on instruction from none other than extraterrestrials.

Why? Well, according to Erich, the lines were put there as landing strips for alien spacecraft. As well as decoration, all designed by those from another planet. He backed up his claim by making a very interesting point as to how the Nazca people would have been unable to sketch out and then create such ornate and precise images from the ground. After all, they didn’t have drones or cropdusters to help them out.

It sounds fanciful and Erich von Däniken’s various theories aren’t exactly taken seriously outside of paranormal circles, but the Nazca Lines raise very similar questions to those that surround the Pyramids of Giza and Machu Picchu.

Just how were ancient civilisations capable of such tremendous feats? It could well be that we’ll just never know for certain.