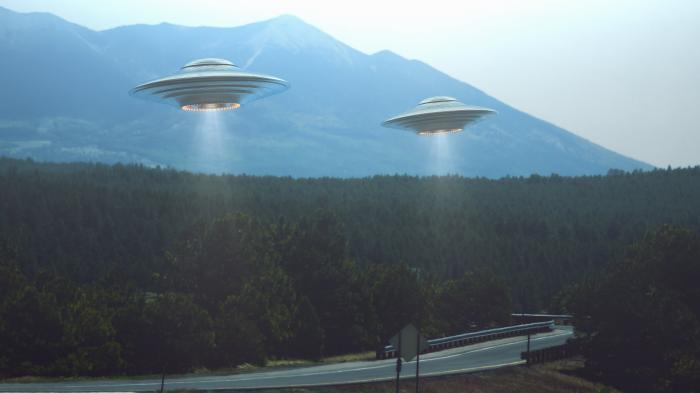 While many of the most memorable UFO sightings and incidents date back as far as the 1940s, there have already been plenty of sightings this century too. The last couple of decades have not been quiet when it comes to extraterrestrial activity, with numerous UFO sightings reported around the world.

Here are just five of the most compelling UFO sightings of the 21st century, so far.

The Dudley Dorito was spotted not once, not twice but several times in and around the West Midlands area and near the Welsh border. The UFO has been seen many times since 2010 and the similarity in reports makes it seem very believable.

In December 2011, a man and his family saw a black triangle with white lights at each flying towards Hagley from the direction of Birmingham. It was also spotted in Shropshire and Welshpool and its unusual triangular shape is clearly where it gets its unique name from. Some ufologists and locals claim there have been alien abductions in the region too.

The craft was first seen by a ramp employee engaged in pushing back United Airlines Flight 446. The crew of this aircraft were quickly informed and saw the same strange sight. The object was described as completely silent, between 1.8m and 7.3m in diameter and disc-shaped. Further witnesses outside of the airport also claimed to see a hovering craft.

Probably one of the best-known incidents of the 21st century, the craft described as a “white Tic Tac” was spotted and recorded by Navy pilots. Based aboard and training on the USS Nimitz, the Navy pilots caught the footage of the craft in November 2004. U.S. Navy pilot Cmdr. David Fravor spotted the flying vessel about 60 to 100 miles off the coast of San Diego, California. Fravor described the craft as “something not from the Earth” and hanging close to the water, not moving, or making any sound.

The Pentagon has commented upon this incident confirming they accept there are unidentified flying objects present in their airspace, but avoided the use of the term 'extraterrestrial'.

The Stephensville UFO sighting was witnessed by several locals in the area, adding to its provenance and believability. Residents in the West Texas town spotted the unexpected flying object in January 2008.

As many as 40 people claim to have seen the object, including police officers and a pilot, who say it hovered over the town for at least five minutes before zooming away into the night sky. The object was described as “bigger than a Wal-Mart” and eerily silent, with flashing strobe lights.

On January 25th, 2010, there were multiple reports of UFO sightings in Harbour Mille, Newfoundland, and Labrador, Canada. There was an immediate government response, with the Royal Canadian Mounted Police stating they were preparing a missile launch. However, this was then retracted, with the Office for the Prime Minister confirming they were not missiles.

No known missile or rocket launch could be found at the time so many believe each sighting was evidence of genuine extra-terrestrial activity. This wasn’t the first UFO incident in Newfoundland and onlookers said they seemed to rise from the ocean before disappearing off into the sky in a trail of smoke and flames.

The 21st century is far from over and if history tells us anything it’s that there will be many more UFO sightings as the years pass. Maybe as technology advances, we’ll finally have the opportunity to communicate and engage with our intergalactic neighbours.